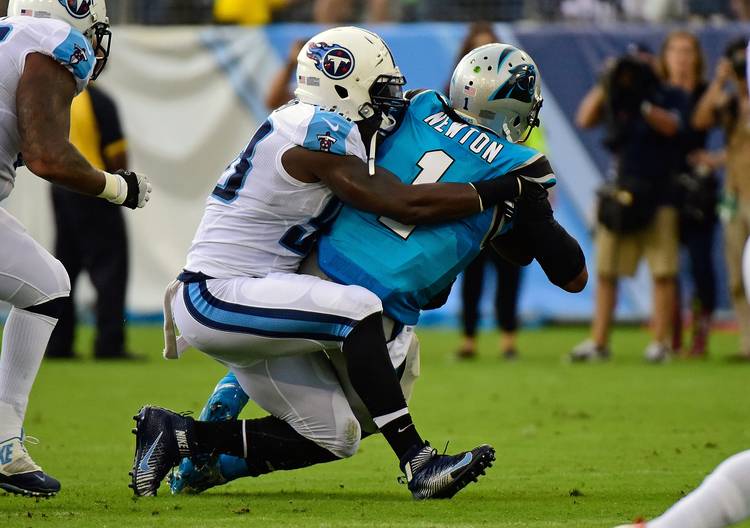 Quarterback Cam Newton, right, of the Carolina Panthers is sacked by Brian Orakpo of the Tennessee Titans during the first half at Nissan Stadium on Aug. 20, 2016 in Nashville, Tennessee. (Photo by Frederick Breedon/Getty Images)

Workplace bets are no stranger to the Red River Showdown.

They’re especially fun in NFL locker rooms, where some of the participants actually played each other on the field. Such is the case between Tennessee Titans DeMarco Murray and Brian Orakpo.

Rivals in college, the former Longhorns defensive end and Sooners running back became teammates this season and decided to place a friendly wager on the result of Saturday’s game in Dallas.

RELATED COVERAGE: Longhorns again score lots of points, give up even more

Since the Longhorns lost, Orakpo had to wear an Oklahoma jacket — presumably Murray’s — when he faced the media on Monday. Take a look below.

.@rak98 paying up on his bet with OU jacket after his Longhorns lost the Red River Shootout to DeMarco Murray's Sooners. pic.twitter.com/ZKYQiSZhP7

.@rak98 is smiling, but he's not happy w attire. Lost bet to @DeMarcoMurray, which explains why a @Longhorn_FB guy is wearing @OU_Football pic.twitter.com/BXj0hqPFmP

As for their current team, the Titans defeated the Miami Dolphins 30-17 on Sunday, and both players were big factors in the win. Orakpo had five tackles, including two sacks and three tackles for loss. Murray ran 27 times for 121 yards.

And in case you were wondering, Orakpo still looks better in orange than he does in crimson.

Golden: D’Onta Foreman is most underrated running back in college football