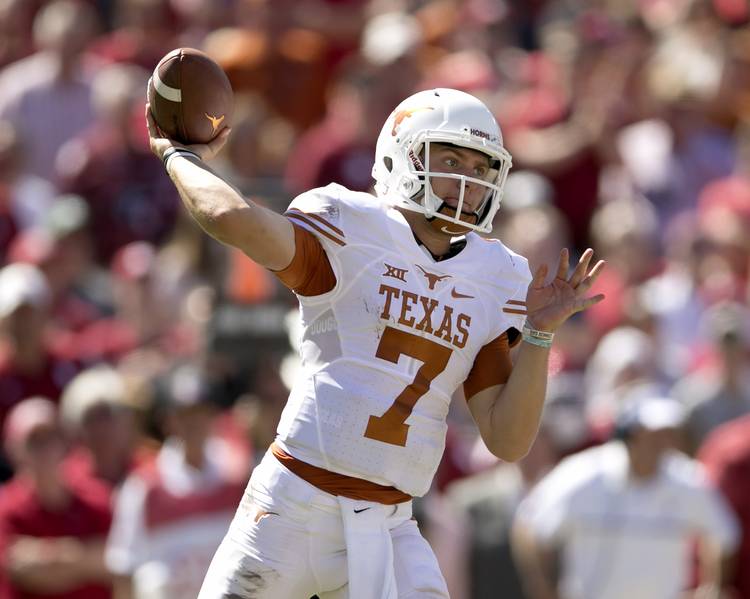 Texas quarterback Shane Buechele was one of 10 players added to the Manning Award watch list on Wednesday. The award is presented annually to the nation’s best quarterback.

Buechele, a freshman from Arlington Lamar, is busy rewriting the entire UT freshman record book despite the team’s 2-3 record.

In five games, Buechele has already passed for a new freshman-record 1,204 yards and 11 touchdowns. He became the first freshman quarterback to start the season opener since Bobby Layne did it in 1944.

Buechele’s 245 passing yards in last week’s 45-40 loss to Oklahoma was the third-highest total by a UT freshman in the Texas-OU series.

“He’s a guy that wants to be really, really good and every day, and he’s in the process of doing that,” UT offensive coordinator Sterlin Gilbert said after Tuesday’s practice. “He’s as hard and critical of himself as I am of him as a coach.

“With him, it’s just about him growing and developing and understanding what plays are there and what plays he needs to make,” Gilbert added. “The positive thing is, for his age and where he’s at and experience, he’s done a really good job of continuing to do that thing.”

Bohls: Devin Duvernay’s going to be a star; D’Onta Foreman will be a great pro