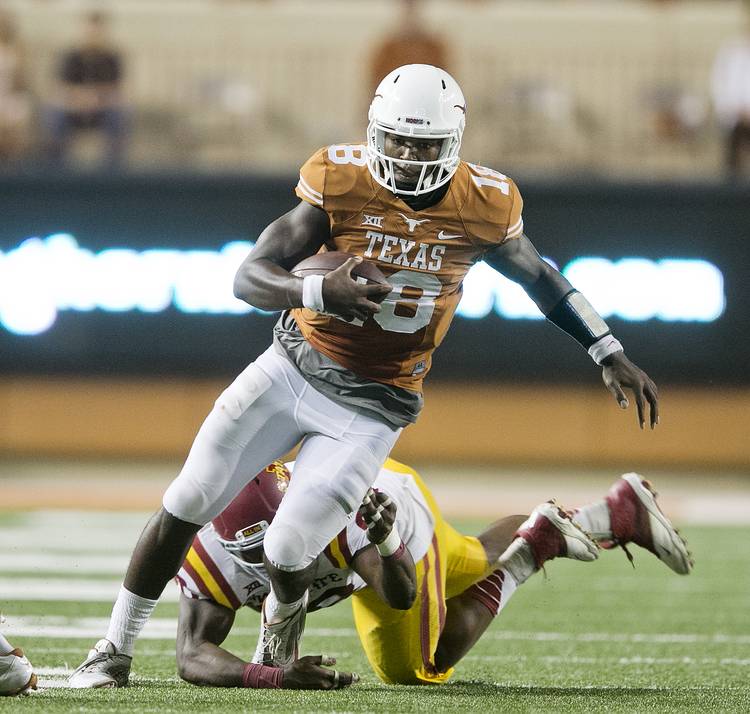 Tyrone Swoopes threw for 321 yards and ran for 95 against Iowa State in 2014. DEBORAH CANNON / AMERICAN-STATESMAN

When discussing the moments that define Texas football, games against Iowa State don’t exactly stand out.

However, the Longhorns and Cyclones have had some close ones in their somewhat brief history of playing each other, and some stars have emerged in a game that often gets lost in the shuffle of the Big 12 schedule.

Here are some moments that stood out from the 14 meetings between the two schools — starting with the most recent:

Two of the best throws of Tyrone Swoopes’ career came on back-to-back plays against Iowa State in 2014. Had he missed on either of them, the result of this game may well have been different.

After the Cyclones tied the game at 45-45, Swoopes had just 28 seconds to get the Longhorns into field goal range. Perfectly placed balls to Jaxon Shipley for 39 yards and John Harris for 30 yards set up Nick Rose for a chip shot to win the game.

Lady luck was on the Longhorns’ side in this one. Texas running back Jonathan Gray appeared to fumble the ball twice on back-to-back plays near the Iowa State goal line late in the fourth quarter. Referees ruled that he was down on both, and Case McCoy scored on the very next play for a 31-30 win.

The victory was but a blip during Mack Brown’s last season as Texas coach, but it was thought of much differently on the other side. Cyclones coach Paul Rhoads gave an epic rant during his postgame press conference.

Playing its first game after the death of legendary coach Darrell Royal, the Longhorns honored his memory with an emphatic 33-7 win over the Cyclones.

In a touching tribute, Texas lined up in the wishbone formation Royal’s teams made famous for its first offensive play. Except, this wishbone had a twist to it. Quarterback David Ash pitched the ball to Jaxon Shipley, then got it back and heaved it downfield to Greg Daniels.

Expectations were high for Jaxon Shipley playing in the shadow of his brother Jordan, and he gave a glimpse of things to come in a blowout of the Cyclones his freshman year. Shipley made six catches for 141 yards and a touchdown, which came on a 40-yard reverse pass from David Ash.

Watch the play around the 4-minute mark of the video below:

The only top-25 matchup in series history pitted No. 17-ranked Iowa State — led by Seneca Wallace — against No. 7 Texas in a rainy Royal-Memorial Stadium. The Cyclones led 10-7 at halftime, then sophomore running back Cedric Benson eased the tension with a 59-yard touchdown in the third quarter.

Benson finished the day with 199 yards on 30 carries, including two scores. Watch his long burst at the 1:21:10 mark: