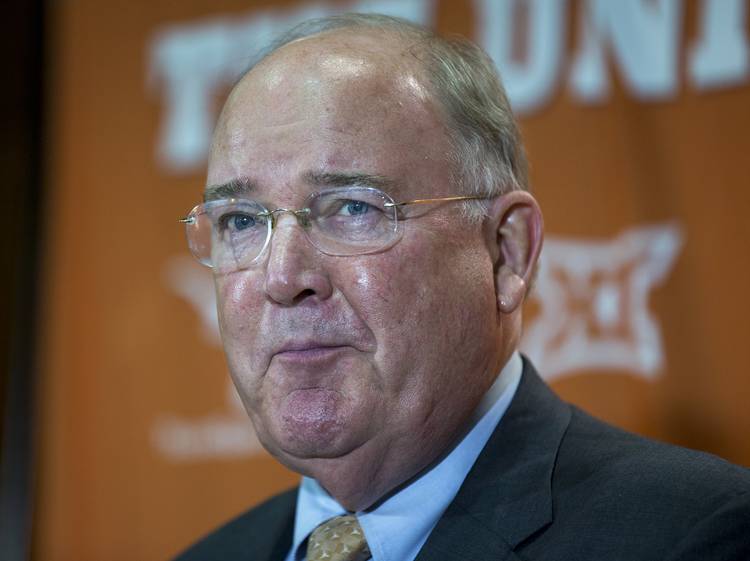 University of Texas Athletic director Mike Perrin answers questions during a press conference at the Centennial Room of Bellmont Hall on Thursday, June 30, 2016. RICARDO B. BRAZZIELL/AMERICAN-STATESMAN

The Cotton Bowl tunnel is usually full of Texas-Oklahoma celebrities, well-wishers and some of the most interesting people in Dallas.

Walking up the ramp during pre-game, I saw (in this order) OU women’s basketball coach Sherri Coale, Texas athletic director Mike Perrin and his wife Melinda, Emmitt Smith, Little Joe Washington and finally Vince Young. Just an incredible scene as I headed toward the press box.

What I saw going down the ramp an hour or so prior left an indelible impression, too.

As the Sooners came out of their locker room, there was OU coach Bob Stoops, standing squarely in the middle of the ramp, ready to pump up his troops. He banged on every players’ shoulders pads as they headed down the runway and out onto the field.

Standing literally about 10 feet to Stoops’ right was OU athletic director Joe Castiglione, clad in his tailored suit, red tie and wearing sunglasses. It’s long been my belief Castiglione, one of the most respected administrators in college athletics, sleeps in this attire.

After all the players exited, Castiglione and Stoops came together for a hug. It was one of those man-hug, let’s-go-get-’em embraces. The two walked down the tunnel together. Stoops went out on the field, and Castiglione stayed behind to chat.

Now, in no way am I demanding that Perrin should be standing outside the locker room before games specifically so he can hug Charlie Strong. But it was a reminder that a strong athletic director/football coach relationship is absolutely essential.

Former Texas athletic director Steve Patterson wanted Strong to succeed. Patterson was the AD who fought for Strong’s assistants, getting them all guaranteed multi-year contracts in 2014. That was a first in UT history.

Perrin wants Strong to succeed. Let there be zero doubt that Perrin wants to win as badly as anyone. But something remains amiss. If Perrin is in full command, as UT President Gregory L. Fenves wants us to believe, why is he still having to dispel notions that he’s a placeholder?

Perrin does not have an official contract, per se, only an agreement with Fenves to work through the 2017-18 athletic year.

Regardless whether there’s a coaching change or not, Texas needs to do something about the perceived lack of athletic department leadership. That’s on Fenves. Either give Perrin an extension, cement his status and remove all doubt or move on to somebody else. Trust me on this, Greg, everyone from the head coaches down to the worker bees in the north end zone would appreciate it.

When the current AD must wait for the president to return from Asia just to green-light the hiring of a baseball coach, you’ve got a problem.

In the long run, the person who sits in the AD office for the next decade is just as important as who runs Moncrief. Whether Strong stays or Texas hires Tom Herman or archeologists resurrect Vince Lombardi, what is one of their most important questions?

Well, I’ve put off the inevitable long enough. Time to hold my nose and dive into this “cesspool.”

Q. Kirk Bohls and you both wrote good pieces addressing Herbstreit’s derogatory comment against The University of Texas on national TV. Bravo. Here is a perfect example of where AD and President should now demand an apology from ESPN (a large financial partner). Herbstreit should be persona non grata at The University of Texas until he publicly apologizes to UT, its students, athletes, alumni and community. Perhaps your editor will take this opportunity to editorialize the issue. Force AD and President to comment, respond.

— Ron in Spain via email

Q. You’re a sports announcer and you’ve never seen this before? Grow up. It’s a results driven job and in Strong’s third year, the results aren’t there. He’s great with his values and accountability. Wins, not so great.

Q. Go ahead! Get rid of Strong so these idiots can face reality of being mediocre for more years. Players will transfer because they joined Texas because of Strong. Delusional morons. Kirk is right.

Q. It’s Red McCombs and the Texas Boosters who are the cesspool.

LISTEN: Herbstreit went on with Bucky & Erin on 104.9 The Horn to discuss his “cesspool” comment.

DAVIS: First off, for the record, we reached out to president Gregory L. Fenves and athletic director Mike Perrin about Herbstreit’s comments. Both took a pass. I truly thought Herbstreit’s comments on College GameDay were way over the top, and a little unfounded, actually. Charlie Strong hasn’t been supported? The UT fan base is a “cesspool?” C’mon, Herbie. That’s ridiculous and simply not true. Bohls’ column on Tuesday chronicles all the ways UT has supported Strong. Any coach at a school of this size would be feeling heat if he was 13-17. That’s just the way it goes.

Q. If they make a 2nd tier bowl, Charlie will be back. That’s a big IF, since they have 4 more wins to get to be bowl eligible, and they’ve lost 3 straight games, giving up an average of 47 points. I don’t think any of their remaining games, even Kansas, is a sure thing.

DAVIS: At this point, the idea of making a bowl game seems like a million miles away. Texas simply needs to focus on a hungry Iowa State team that is due for a win. The Cyclones (1-5, 0-3 Big 12) kept the Horns from crossing their 47-yard line for three quarters last season. It was a 24-0 burnt-orange disaster on Halloween night in Ames. The Horns need to focus on snapping this three-game losing streak before thinking about anything else.

Q. So, we did not have a QB. Now we do and he is an 18-year-old freshmen. Strong is the right man for Texas. Screw all you non-believers. I do not see you complaining about the recruits he has gotten and they are all freshmen and sophomores!! Wow, what a future.

DAVIS: I count only 10 upperclassmen among the team’s 22 offensive and defensive starters. That means more than half of those are sophomores or freshmen. Yes, the overall makeup of the team skews younger than most. I still believe it’s a talented team. Nobody should go around saying the Longhorns don’t have quality playmakers. Even the coaches would tell you they have enough talent. Strong should get credit for his back-to-back top-10 recruiting classes. At this point, 15 freshmen have played, and four have started. Getting them to perform on the field is a whole other topic.

Q. Look guys, as pissed as I was today and ready to see Strong hit the unemployment line, cooler heads need to prevail. Defense is struggling big time, and Texas is not getting blown out. Eight sophomore starters on defense playing a against a good OU offense. Mayfield looked as good as he has all season and a healthy (Samaje) Perine is an animal. Still, this defense should be better. I’m at a point now that if Strong stays or goes, I really don’t care. A tough pill to swallow.

DAVIS: It did not appear the defense had any noticeable changes with Strong calling plays for the first time. The unit played pretty well in the first half, and then things fell apart after halftime. The run defense had been OK so far through the first four games. It was surprising to see Pflugerville’s Samaje Perine get so much room to romp. He finished with 214 yards on a career-high 35 carries and scored twice. Strong himself said the big passing “chunk” plays are the problem. That’s how Dede Westbrook finished with 232 receiving yards on just 10 catches.

I had plenty of folks sounding off about FS1’s broadcast of the Texas-OU game. At least, I heard from those who found it on their TV dial.

Q. That’s 2 years in a row I’ve missed the game because of the networks. Last year, Dish suspended its deal with ABC during the game. This year, it was on FS1 and I don’t get that channel.

A perfect storm of bad coaches, an unknown network and 2-2 teams in a nothing conference.

Blame the network! If it airs next year on FS1 I’ll mute the commentators like I did Saturday. Got sick and tired of them defending OU AND trash talking the Horns!

DAVIS: On Monday we learned the Texas-OU game registered a 2.0 overnight rating. That’s the lowest overall rating since 2000, but probably one of the highest in FS1 history. For many years, Texas-OU was available on an over-the-air station like ABC. According to the Big 12’s TV contracts, Fox and ESPN have a draft each year where they can pick their favorite games. Fox chose Texas-OU and placed it on FS1. Having two 2-2 teams going at it at 11 a.m. probably didn’t help draw in the average unaffiliated sports fan.

Now, about that 18-Wheeler…

Q. We may put in passing plays??? Seriously?? I’ve been calling for them to let Swoopes throw outta of this package for weeks. The defense is crowding the line. A pop pass to a tight end would be killer.

DAVIS: Frankly, this idea that Texas “may tweak” the 18-Wheeler short-yardage package is comical to me. If there ever was a time for a pop pass or some creativity with Swoopes, it should’ve happened against OU. Are these coaches that worried about what Swoopes may or may not do if asked to throw? Surely he hasn’t regressed that much, right? The only time Swoopes has attempted a pass out of the 18-Wheeler came on a deep ball against Notre Dame. That’s been it so far. Of course, now that this is an issue, I bet we don’t see Swoopes passing anytime soon. Need to keep the element of surprise.

Finally, let’s end on the comments from the Tyler Rose, the great Earl Campbell. He told KVUE this week that irate fans should leave Strong alone.

Q. Earl is right! Leave Coach Strong alone and let him focus on what he does – not all of this junk about always being on the ‘hot seat’! He’s a great coach, who is being distracted by impatient people who want him to put together a perfect national championship team in an unreasonable amount of time. These same people are the problem with Texas football – not Coach Strong or the players! If everyone would leave him alone, the program will get there!!!!

Q. Man, if Earl says let the man coach I have to agree…Strong has a 5 year contract, let’s see what the final product is instead of this Chicken Little kabuki dance.

Q. Yeah, I pay $300 bucks for a ticket to watch Charlie Strong make men. Good luck with that.

DAVIS: OK, first off, any reference to a “Chicken Little kabuki dance” makes me laugh. If McCombs has carte blanche to say whatever he wants after giving Texas all his money, then Campbell certainly has the similar runway to express his thoughts unfiltered as well. After all, Campbell earned his right to say whatever he wants by winning the 1977 Heisman Trophy and rushing for a 4,443 yards as a Longhorn. It’s pretty clear that Campbell is a Strong supporter and one of the most die-hard Longhorns imaginable.