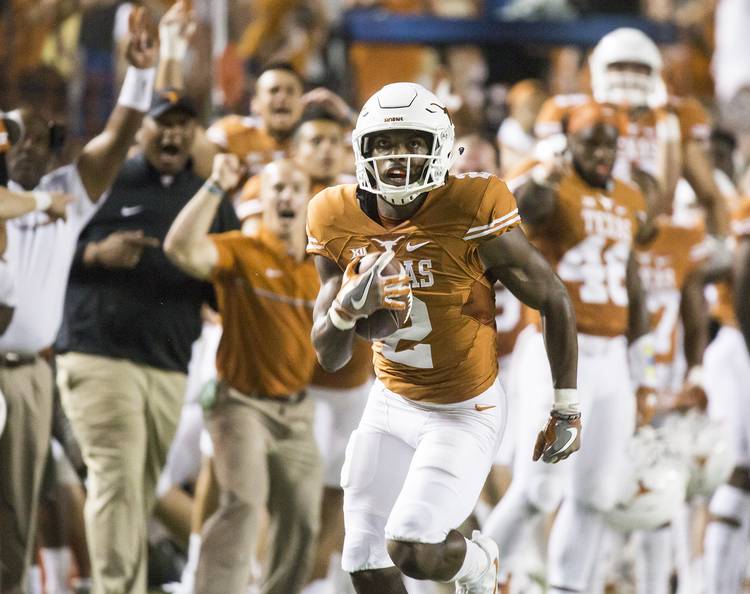 Texas receiver Devin Duvernay run into the end zone putting the longhorns up 17-3 against Iowa State's Evrett Edward during the third quarter of a NCAA college football game, Saturday, Oct. 15, 2016 at Royal-Memorial Stadium in Austin, Texas. RICARDO B. BRAZZIELL/AMERICAN-STATESMAN

Texas freshman Devin Duvernay, who had a 75-yard touchdown catch against Iowa State was named the Big 12 newcomer of the week, the league office announced.

Duvernay finished the game with four catches for 96 yards. This came one week after he had a 63-yard touchdown catch against Oklahoma.

So far this season, Duvernay has nine catches for 193 yards. On Saturday, Duvernay met reporters for the first time in his UT career.

“Our destiny’s in our own hands, and we’re just continuing to get better each and every day in practice,” Duvernay said. “We believe in each other, and we’re going to keep believing.”

#Big12FB: Duvernay caught four passes for a team-high and career-high 96 yards and a touchdown in @Longhorn_FB's 27-6 win over Iowa State. pic.twitter.com/JJ1C7vXvZP

Marvin Wilson, top recruit in Texas, saw the love from Texas fans during his visit