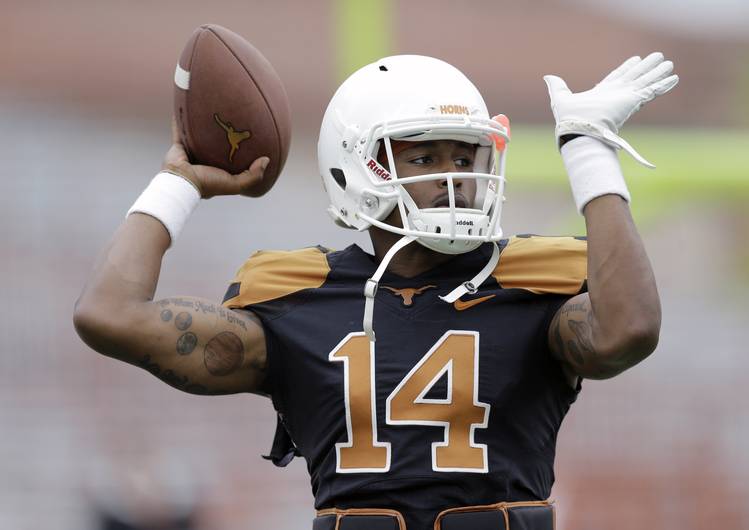 Texas quarterback Kai Locksley, a redshirt freshman who never played, confirmed via text on Monday that he is leaving the Longhorns.

Locksley said he would issue a statement that explained his rationale. Based his social media postings over the last year, Locksley was frustrated about the lack of playing time and sitting fourth on the depth chart.

“Kai and I had a conversation about a month ago, and he just felt like he needed to go somewhere else,” UT coach Charlie Strong said Monday. “Out of respect for him, I just told him, ‘Listen, just go take care of your classwork. Make sure you take care of your academics so wherever you do decide to transfer you have enough GPA where it won’t be an issue.’”

Locksley was considered a promising prospect. A 6-foot-4 athlete from Baltimore, he was initially committed to Florida State. However, the Longhorns desperately needed a quarterback once they lost New Mexico’s Zach Gentry to Michigan.

Strong and former co-offensive coordinators Shawn Watson and Joe Wickline all flew to Baltimore in late January 2015 in a make-or-break gambit to get Locksley to change his mind. It worked, and the four-star recruit signed with UT.

“I think Texas is in the midst of really making that step back to where they were for a very long time,” Locksley told the American-Statesman after signing day. “But we’ve got to put in the work and answer to coach (Charlie) Strong and do everything he’s telling us. He’s a winner.”

But Locksley never challenged for the starting job and redshirted last season. In the spring game, Locksley was scheduled to play the second half but that got rained out. In August, he was behind Shane Buechele, Tyrone Swoopes, Jerrod Heard (who moved to receiver) and Matthew Merrick.

“Honesty is a lost cause now a days.., “ Locksley tweeted after the spring game. “Could’ve told my mother to save her money on the plane ticket.”

Big 12 Expansion: conference not inviting anyone to join, sources say