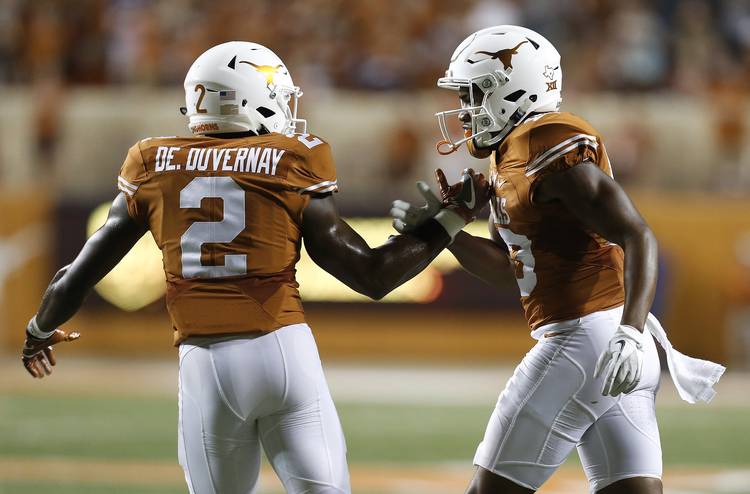 There’s no lack of speed on the Texas roster. In the receiving corps alone, the Longhorns have shown an ability to stretch the field against every opponent they have faced so far.

Saturday against Iowa State, the main culprits were converted quarterback Jerrod Heard and freshman sensation Devin Duvernay. Heard got open for a 37-yard touchdown in the third quarter, and Duvernay left a pair of Cyclones in the dust for a 75-yard score on Texas’ next possession.

Duvernay claimed Big 12 newcomer of the week honors for his four-catch, 96-yard performance.

Even so, Heard has called himself the fastest receiver on the team, which has sparked some lighthearted banter in the locker room. Duvernay, a Class 6A state champion at 100 meters,  even went so far as to challenge Heard to a race.

The topic came up at Monday’s media availability.

J.Heard says he is UT's fastest WR. D.Duvernay challenged him to settle it on the track. Said Dorian Leonard: Jerrod still hasn't done that. pic.twitter.com/8mNb8RefM5

Devin Duvernay says he can beat Jerrod Heard in a footrace wearing, "Spikes, flip-flops, shoes, whatever."

Later that evening, Heard took the banter to Twitter.

While Heard has certainly shown speed as both a quarterback and now as a receiver, Duvernay has a proven track record. Check out the wheels he showed in winning the UIL 6A 100-meter dash in a personal best 10.27 seconds:

Still no word on whether the race has been scheduled.

Bohls: How far off is Texas from being a national title contender?