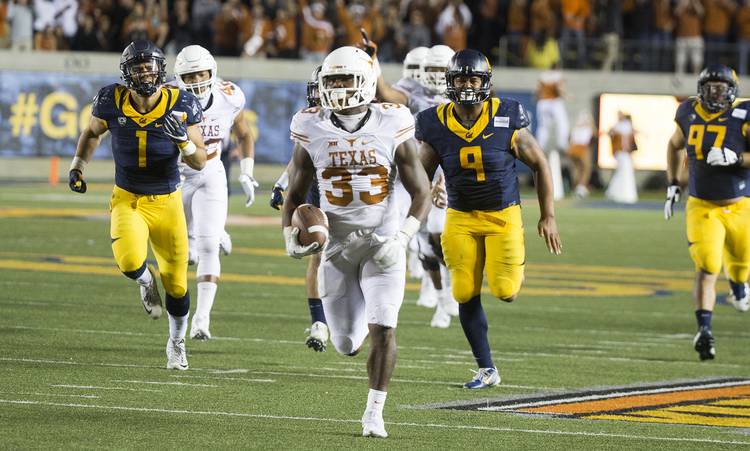 The jury is still out on Texas’ season as a whole, but junior running back D’Onta Foreman is having a fall for the ages.

He ranks 13th nationally in rushing yards (731) and second in rushing yards per game (146.2). His seven consecutive games with at least 100 yards rushing are the most of any active running back in the Football Bowl Subdivision.

But, let’s be honest, what you really care about are highlights. Foreman has made plenty of those, too.

Here are the best of Foreman’s 117 totes this season. Unsurprisingly, all of them are touchdowns. It’s really hard to bring down a runaway train.

Foreman runs hard all the time, no matter the score or where the Longhorns are on the field.

That’s a great attribute for a team to have in its best offensive weapon, especially when the going gets tough late in games. Texas could have thrown in the towel went it went down by two scores late against Oklahoma in the Red River Rivalry, but Foreman wasn’t having it.

He ripped off this 23-yard run, which gave the Longhorns a chance in the closing minutes.

It's not over! D'Onta Foreman scores a big TD late in the 4th quarter. #RedRiverShowdown https://t.co/1Rsa30OVaO

Foreman’s bruising running style takes a toll on defenses. That often means that he does his best work late in games, and that rang true last Saturday against Iowa State.

This 18-yard score not only extended Texas’ lead to 24-7, but it also felt like it took away whatever wind was left in the Cyclones.

3. Big in the clutch

Here’s one you may have forgotten, just because of everything that transpired after.

If Texas doesn’t convert on third-and-5, who knows what would have happened on fourth down with the Longhorns trailing Notre Dame late in the fourth quarter.

It looked like Foreman was about to go down short of the line to gain, but then he steadied himself with a strong hand and zoomed past the blitzing Irish to put Texas in front.

The lead was short-lived as Notre Dame blocked the ensuing extra point and returned it, setting up Tyrone Swoopes’ heroics in overtime. But without Foreman, OT might not have happened.

You probably expected this to be No. 1, and really it could go either way.

Foreman got a rare chance to showcase his wheels in Stillwater, where he rumbled 62 yards for a touchdown — his longest run of the year. Similar to the run against Oklahoma, he gave the Longhorns a much-needed shot in the arm. Unfortunately he also got hurt on the play and had to sit out the fourth quarter.

Two of the best attributes most great running backs possess are footwork and vision. Foreman showed off both to break off a 47-yard touchdown run in the second half against California.

Yes, Foreman had great blocking to clear the path. But it’s that ever so subtle step to the right that allows him to avoid the defensive tackle, and the downfield vision to cut back left through the hole into daylight.

By the time he reached the line of scrimmage, he was already gone.

Report: Average Texas football player worth more than $670,000 a year

Longhorns will now walk into DKR off DeLoss Dodds Way