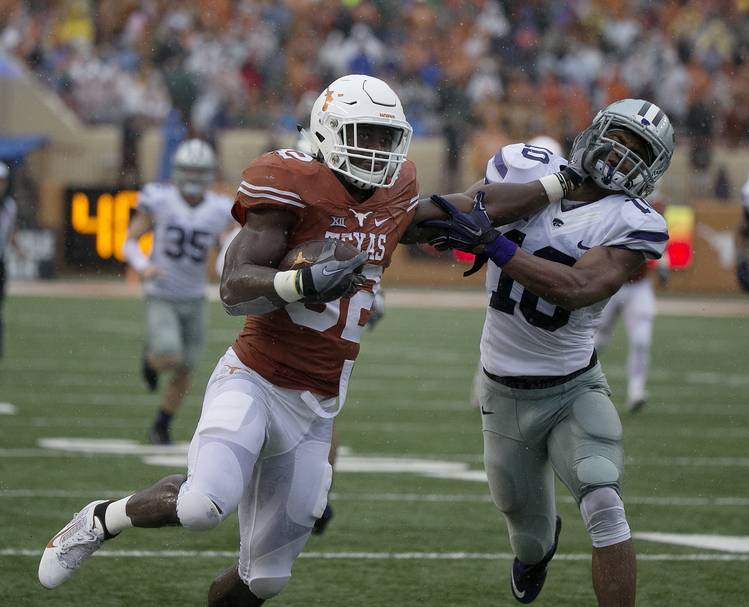 Texas's Johnathan Gray pushes back on the defense of Kansas State's Donnie Starks during the first half of their game at Royal Memorial Stadium on Saturday, October 24, 2015. DEBORAH CANNON / AMERICAN-STATESMAN

This started as a top five list, but it didn’t make it that far.

And that’s not out of laziness. Texas simply has not played well against Kansas State in modern history.

Looking through box scores from these games is like reading a murder mystery. A slow, painful tale emerges: Bill Snyder, in his family’s stadium, with a bunch of underappreciated, underrated players.

Texas is 7-9 all time against the Wildcats and has only beaten them once inside Bill Snyder Family Stadium. Since the Big 12 began, I could only find four players who had truly impressive statistical games against Kansas State.

During Ricky Williams’ senior season, one of the most prolific Heisman Trophy campaigns in college football history, he rushed for 43 yards in a 48-7 loss in Manhattan, Kansas.

But hey, Wane McGarity had a big game against the fearsome Wildcats, catching five passes for 142 yards and the Longhorns’ only touchdown.

Texas’ only victory in the Flint Hills came in 2002. Cedric Benson was held to just 59 yards on 23 carries. That meant someone else had to step up, and wide receiver B.J. Johnson obliged.

Johnson had four catches for 132 yards and a touchdown, and he made a huge catch on third-and-long to help set up the game-winning field goal. You can watch that play at the 1:59.21 mark below:

But it was the other Johnson who may have had the best performance ever by a Longhorn against K-State. Linebacker Derrick Johnson had 14 tackles (11 solo) and a pair of sacks to help Texas escape with the victory.

Johnathan Gray is the only Texas running back to rush for over 100 yards against K-State in the Big 12 era — and he did it twice. In 2013, Gray carried the ball 28 times for 141 yards and two touchdowns as the Longhorns beat the Wildcats 31-21.

If I missed any notables, feel free to let me know. But I won’t blame you if you didn’t read this far. Texas versus Kansas State is a scary topic at best.

Longhorns will now walk into DKR off DeLoss Dodds Way