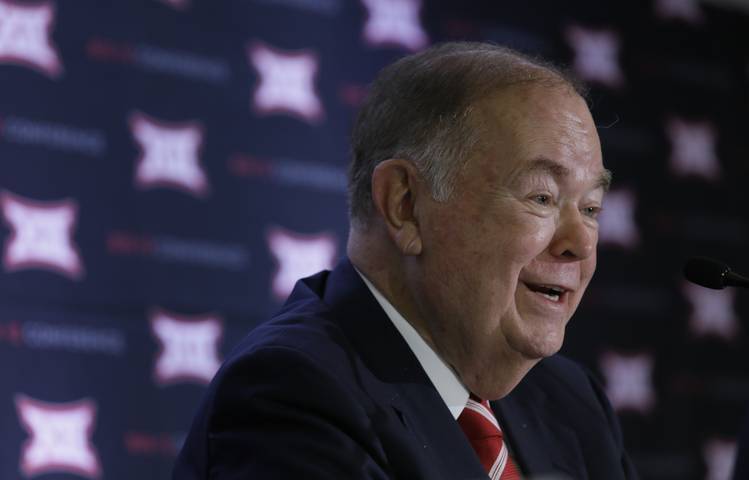 Texas actually won a game last week. No, seriously, in case you didn’t hear, the Longhorns knocked off the Iowa State Cyclones and snapped their three-game losing streak.

Unfortunately, there wasn’t much discussion generated by a win over a team that came into Austin with a 1-5 record.

What really got fans’ dander up this week was Monday’s news about Big 12 expansion, or rather the lack thereof:

Q. I didn’t want to expand, but you don’t tell 20 schools to put together proposals, and then say never mind. We should have picked 2 at this point. Bowlsby is a fool, Horns end up in the Big 10 or Pac-12, either one of those moves are fine with me. My dream scenario is to get two teams currently in Power 5’s and get them to come over but no way that happens unless the Horns and Sooners sign a grant of rights that goes well beyond 2024.

Q. Why put the schools through this when there was no hope for them to join in the first place? If you want to call it The Big 12 then there should be 12 teams!!! They didn’t want to share their money!!!

Q. This was nothing more than a money grab. This (expletive) conference just wanted more money and they was going to get it one way or another.

Q. Cougar High was dumb enough to believe that a Power 5 conference was actually interested, so it’s their own fault.

Q. This conference is a joke. It will be gone in 4 years

DAVIS: Where to begin? Well, for weeks it appeared the Big 12 was leaning toward no expansion. Oklahoma president David Boren was the one who started this whole mess, saying the league was “psychologically disadvantaged” for its inability to get a league-wide network. But why the Big 12 put everyone through this ringer only to do nothing is still baffling. If you take all the emotion out of it, this league is probably better off by not adding teams. There’s not a single candidate out there that moves the financial needle in any dramatic way. Sorry, Houston. My apologies, BYU.

Here’s the real problem for Texas. The school has no interest in extending its grant of rights beyond the 2024-25 athletic year. OU won’t do that, either. So let’s drop all the “we’re stronger than we’ve ever been” rhetoric. If that was indeed the case, Texas and OU would agree to extend their TV rights for another decade or so. By not extending its rights, Texas continues to remain flexible.

I still contend Texas will end up in the Big Ten when this is all said and done. Oklahoma will go to the SEC, and the other eight schools will have to fend for themselves. Why schools like Texas Tech and TCU think Texas will “save” them in the end is beyond my comprehension. Every single school in this league should be thinking about itself and nobody else. Memo to the Red Raiders, Horned Frogs and Bears: I promise you the Longhorns are worried about their long-term future, not yours.

Some readers weren’t real excited to hear from Gov. Greg Abbott, who supported Houston getting into the Big 12.

Q. Politicians should stick to being politicians. No sense in screwing up college football with politics.

Q. I actually agree with him for once and sooner or later going to have to add two teams.

DAVIS: The simple fact you had so much political muscle involved in Big 12 expansion was a true testament to how big this issue really was. Abbott was correctly trying to push for Houston to get into the league. The last thing the governor needs is to be viewed as someone who wasn’t trying to help get a well-known state school make a big step forward.

On Wednesday, we took a look at Texas’ midseason report. As one might expect, the offense looked good while the defense needs some work. And of course, the discussion came right back to Charlie Strong’s job status.

Q. Telling people what they want to hear! Will be gone at the end of the season

Q. If you can’t produce in the state of Texas you’re simply replaceable next year!

DAVIS: The quote about how the Longhorns “don’t want to let y’all down” actually came from defensive end Breckyn Hager, not Strong. Nothing really changed after the win over Iowa State. The coaching staff probably needs to win eight games this year to feel safe.

Some argue whether Strong should be more forceful with his players.

Q. These kids don’t need a daddy. These kids need a coach who can coach them to be winners and be ready for the next level. … I like to start seeing the defense play with some toughness and heart and stop with those cookie cutter offensive plays that’s why they go stagnant by the 2nd half.

DAVIS: Right or wrong, I respect the fact that Strong refuses to call out his players publicly. Other coaches have different views. Oklahoma’s Bob Stoops will usually call out a position, not necessarily the player by specific name. “We need better play from (position X),” Stoops has said over the years. Trust me, the players hear what is said by the coach through the media. That’s why you’ll see coaches send messages sometimes during the press conference. I think after the 2-3 start, it would have been OK to call out some position groups, like the secondary. And Strong did say things like, “We can’t get beat over the top.” There’s no question who he’s talking about there.

On Tuesday, it was learned that Devin Duvernay welcomes a challenge to see who truly is faster — Duvernay or Jerrod Heard.

Q. I’m taking Heard against the other two guys in a foot race.

DAVIS: It might be close, but give me Duvernay.

Former Texas athletic director DeLoss Dodds was honored Tuesday night for his contributions to UT athletics. It was a huge reunion of lots of old-school Longhorns. Mack Brown served as the night’s emcee, and current athletic director Mike Perrin was there to honor Dodds as well. The Longhorn Foundation has launched a fundraising drive to raise $775,000 for one fully endowed scholarship. As of Tuesday, school officials had raised $275,707 from 120 donors. The scholarship would be used to help former athletes come back to campus and finish their degrees.

Q. His legacy is over shadowed by the current state of UT athletics. The word shambles comes to mind.

DAVIS: I wouldn’t say the UT athletic department is in shambles. Far from it, actually. Out of 20 varsity sports, there’s only one that is really up in the air right now. Unfortunately, it’s the biggest, most important one. Well, make that two sports after it was learned that track coach Mario Sategna is now the subject of an ethics and misconduct probe. School officials are tight-lipped about that. Sategna is on indefinite leave. All UT will say that is Sategna’s leave has nothing to do with NCAA or Title IX issues.

Linebacker Malik Jefferson was on ESPN’s “Outside the Lines” on Sunday talking about campus carry.

Q. He should try tackling a ball carrier rather than tackling issues like the Constitution. Sorry. I think I saw his face on a milk carton.

Q. What an ignorant comment. So a young man, one of the most respected guys on the team shouldn’t have an opinion on matters at his university? He should just stick to what he knows, huh? You know that this is one of the brightest kids on the team? He came into UT with great grades when he graduated high school and has very high character. Jesus, act your damn age. What a ridiculous statement to make.

DAVIS: Every university, not just Texas, should crave students like Malik Jefferson. Notice the key word: Students. He’s one of the most well-rounded, contemplative individuals I’ve ever met covering college athletics. The fact that he’s a talented linebacker is only a plus. Strong said he encourages players to use their platform to speak about societal issues, and bravo to Jefferson for doing exactly that. The coach simply encourages players to do their own research before speaking out. So if Jefferson feels strongly about campus carry, he should feel free to express those views. When it comes to campus carry at UT, however, I can do without all the sex toys.