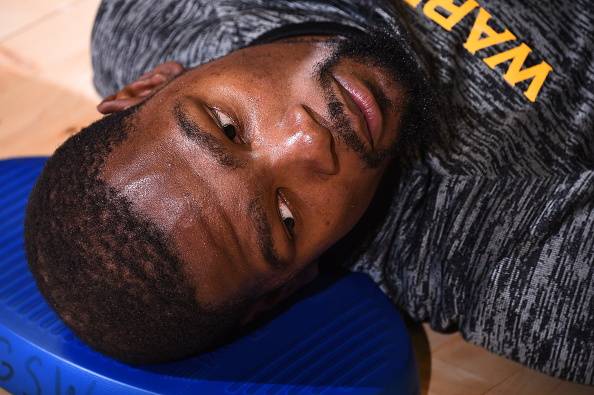 SAN DIEGO, CA - OCTOBER 19: Kevin Durant #35 of the Golden State Warriors is seen before the game against the Los Angeles Lakerson October 19, 2016 at Valley View Casino Center in San Diego, California. NOTE TO USER: User expressly acknowledges and agrees that, by downloading and/or using this Photograph, user is consenting to the terms and conditions of the Getty Images License Agreement. Mandatory Copyright Notice: Copyright 2016 NBAE (Photo by Andrew D. Bernstein/NBAE via Getty Images)

The NBA season begins on Tuesday, and Golden State is the favorite to win it all. And leading that team is the greatest player the Texas basketball program has ever sent to the NBA. But what about other Longhorns in the NBA? Kevin Durant is the best former Longhorn on an NBA roster this season, but where do the others rank? Let’s do the math:

Augustin, 28, hasn’t lived up to his NBA Lottery status since leaving Austin at the end of the 2007-08 season. He wasn’t drafted into the best situation, the Charlotte Bobcats (now called the Hornets), and Orlando will be his eighth team. Kudos to Augustin, though, to continue to find his way on a roster and earn minutes. He has a career average of 24.2 minutes a game, meaning he may bounce around a lot, but he factors into a rotation no matter where he plays.

Last year he played with his former college teammate, Durant, on Oklahoma City. He averaged 15.3 minutes a game and scored 4.2 points. He shot 38 percent from the field and made 24 of the 61 3-pointers. Those stats earned him 4-year, $29 million contract with Orlando.

Joseph, a 25-year-old Canadian, signed a relatively big deal (four years, $30 million) with Toronto at the start of last season — a big deal for a guy a who was barely riding the San Antonio Spurs’ bench the previous season. Joseph, though, factored during the Raptors’ hallmark season, when they went 56-26. He played a career-high 25 minutes per game and shot 43 percent from the field while averaging 8.5 points. Joseph only started four games last season, but he’s the only experienced point guard behind All-Star guard Kyle Lowry for a team that looks to contend again.

Tucker, 31, could miss the opener with a lower back injury after starting 80 games for the Suns last season. He averaged 8 points and 6.2 rebounds, the lowest he’s averaged since re-emerging as a capable NBA player with the Suns in 2012-13 following several seasons overseas. T.J. Warren, a former first-round pick who missed most of last season with a broken foot, is slated to take Tucker’s spot in the starting lineup in the early parts of the season.

The Suns aren’t expected to content this season, unless we’re talking about the NBA Lottery. And Tucker is a veteran and a free agent this summer, so don’t be surprised if a contending team is looking for a little extra front court help in February.

If you’re going to buy future stock in any Longhorn NBA player, Turner could be it. The Pacers think of him so much they’re handing the front court keys to the 20-year-old from Dallas. He’ll start over former All-Star Al Jefferson (at least to start the season) and it’s easy to see why the Pacers think so highly of the 2015 No. 11 draft pick. He started 30 games and averaged 10.3 points and 5.5 rebounds. He shot nearly 50 percent from the field and averaged 22.8 minutes a game. He was placed on the NBA All-Rookie Second team and helped Indiana to the seventh seed in the East. In that series against the Raptors, he had a breakout game, scoring 17 points and grabbing eight rebounds off the bench.

Thompson’s best moments as a professional have come on the biggest stages. His bullying play in the post helped the Cavaliers beat the Golden State Warriors in seven games in the NBA Finals last year. The professional rebounder signed a big deal with the Cavs at the start of last season and he responded by averaging nine boards a game. Thompson isn’t going to be a big-time scorer, but he’s a fan favorite in Cleveland and enters the season as the unquestioned starting center for the defending champions.

Plus he may or may not be marrying a Kardashian.

Bradley has emerged as one of the best players on the Boston Celtics, earning NBA All-Defensive First Team last season. The 2015-16 season was his best in the league, and had he not suffered a season-ending injury in the first round against the Atlanta Hawks, the Celtics may have advanced out of the first round. He’s overcome the hamstring injury and was recently named the second-best perimeter defender in the league. Offensively, he averaged 15. 2 points per game, a career-high. Boston has no shortage of guards, from Isaiah Thomas to Marcus Smart, but Bradley could be the most important of all. Despite being just 6-foot-2-inches, he is the starting shooting guard and one of the best in the league.

The 31-year-old forward was the biggest free agent of the 2015 summer class and he’s one of the best players in the NBA. The Dallas native averaged 18 points per game, 8.4 rebounds and a block. He shot 51 percent from the field and 85 percent from the free throw line.

We don’t have to explain this, do we? Kevin Durant is one of the three best players in the NBA. Take your pick: Lebron James, Stephen Curry or Durant? Durant is a better shooter than Lebron. He’s about a foot taller than Curry and now he’s playing with Curry, so he could be the most unstoppable player in the league. We’re guessing teams will double the former MVP Durant, which means the 28-year-old could improve his assist numbers. Last year he averaged 29.2 points, 7 rebounds and 5 assists a game. Does any player enter this season with a better chance to match Oscar Robinson’s triple-double average than Durant? Passing to a wide-open Curry/ Klay Thompson/Draymond Green could mean a lot of assists.

Lunchtime in Lubbock: Texas and Texas Tech to play at 11 a.m.