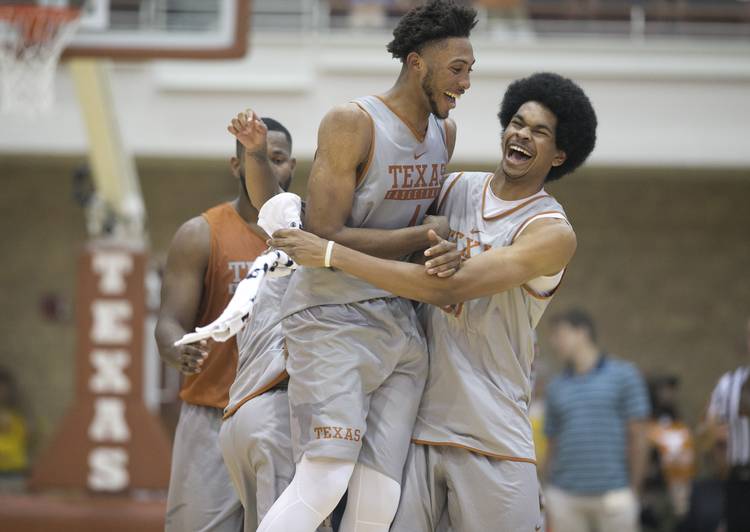 If the season started today, Smart added the 6-foot-11 forward would start alongside 6-8 center Shaq Cleare, giving the Longhorns a formidable frontcourt presence.

“Jarrett’s a great kid and really appreciative of the opportunity to coach him,” Smart said at Big 12 media day held inside Sprint Center. “Very, very long and athletic and has great size but also has very great touch around the basket. For us, he’s going to make a big impact right away.”

Allen did not get to participate during the team’s Texas Tip-Off event last Thursday at Gregory Gym. Team trainers held Allen out as a precaution to protect a sore left hamstring.

If Allen and Cleare are starting inside, that leaves some question about the guard rotation early. Sophomore Kerwin Roach and freshman Andrew Jones will likely rotate at point guard with sophomore Tevin Mack a possible candidate at small forward.

“We’re going to have to play point guard by committee,” Smart said, “and that’ll be interesting to follow.”

Smart, who went 20-13 in his first season at UT, is now entering his eighth season as a head coach. “I still feel like there’s so much left to learn,” he said. “You’d be crazy not to steal some of the stuff that’s been successful at other places.”

Texas was picked to finish third in the Big 12 race behind Kansas and West Virginia.

“Everybody’s so optimistic and everybody’s undefeated, and we are as well,” Kansas coach Bill Self said.

As for the Longhorns’ mental makeup, Smart said his young team is highly competitive.

“I think we’re still a ways away from where we ultimately want to be,” Smart said. “In some ways, this year’s team has maybe more of the makeup that we want to have, but at the same time, we have a long way to go from a standpoint of maturity, growth, understanding of what truly goes into winning.”

Texas versus Baylor: A (recent) history of ‘trash’ talk