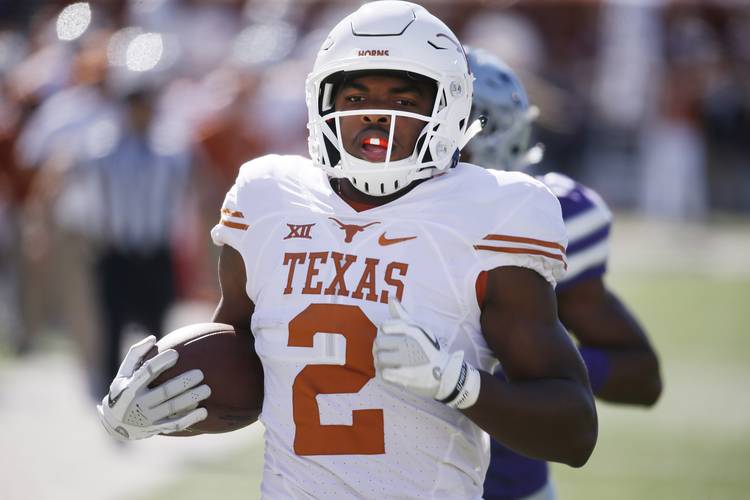 Devin Duvernay carries the ball for a TD during the second quarter of the Longhorn’s games against Kansas State in Manhattan, KS Saturday October 22, 2016 at Bill Snyder Family Stadium, Manhattan, Kansas. RICARDO B. BRAZZIELL/AMERICAN-STATESMAN.

In three short weeks, freshman wide receiver Devin Duvernay has endeared himself to the Texas fanbase.

Fans heard about Duvernay’s speed when the Longhorns announced his addition to the roster after he defected from Baylor. Now, they’ve seen the proof.

The freshman’s three touchdowns account for three of Texas’ five longest plays of the season, and they’ve come in successive weeks against Big 12 opponents Oklahoma, Iowa State and Kansas State.

You can watch all three below:

After only catching four passes through the first three games, Duvernay broke free to start the second half at the Cotton Bowl.

A week later, he provided a much-needed spark to help the Longhorns pull away from the Cyclones at Royal-Memorial Stadium.

Duvernay turned his only target of the day into the game’s most exciting play last Saturday in Manhattan, Kansas. It was Texas’ longest play from scrimmage this season.