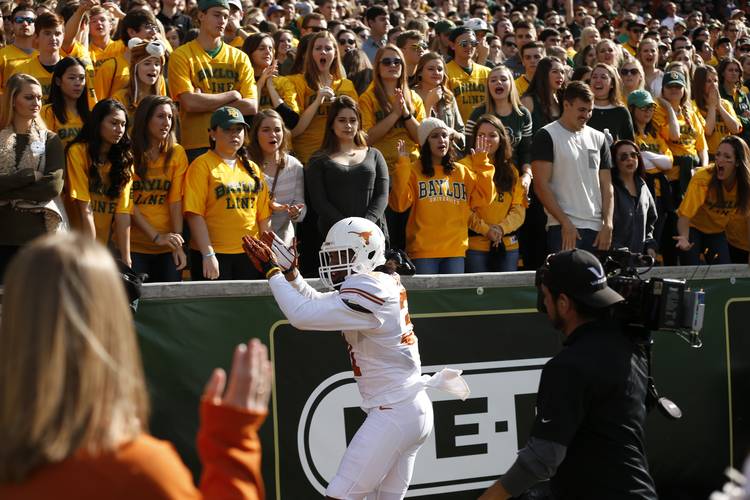 Texas' Jason Hall runs the ball after an interception against Baylor during the first half at McLane Stadium, Dec. 5, 2015. (JAY JANNER / AMERICAN-STATESMAN)

In the rich landscape of college football rivalries, Texas versus Baylor doesn’t even register.

Take this Wikipedia “List of NCAA college football rivalry games,” which has well over 100 entries. You’re not going to find any mention of I-35. Heck, even Texas-Texas Tech and the Chancellor’s Spurs is on there.

Texas versus Baylor? There’s definitely something brewing. Other than the obvious results on the field, there have been more than enough instances to suggest animosity.

“I really don’t like Baylor. I still think they’re trash,” said Edmond, the former Texas linebacker, seemingly out of the blue after the 2014 spring game.

Later that year, leading up to the teams’ meeting in Austin, Harris added to the rhetoric.

The Bears didn’t take too kindly to the comments, responding with a stream of references to their 2013 Big 12-title clinching win over the Longhorns and the recent downward turn of Texas’ fortunes.

I love this trash too. pic.twitter.com/WosPbdSTJa

They ain't been nothing since Vince Young left..

“It’s a sign of something… I just can’t put my finger on it,” Baylor lineman Pat Colbert said.

And who could forget last year, when the bad blood nearly boiled over into an on-field brawl after Baylor’s Lynx Hawthorne slammed Texas cornerback Duke Thomas along the Longhorns sideline. Both benches cleared, but more words were thrown than punches.

What’s the next chapter in this budding rivalry? We’re about to find out, and chances are it won’t be hugs and handshakes.