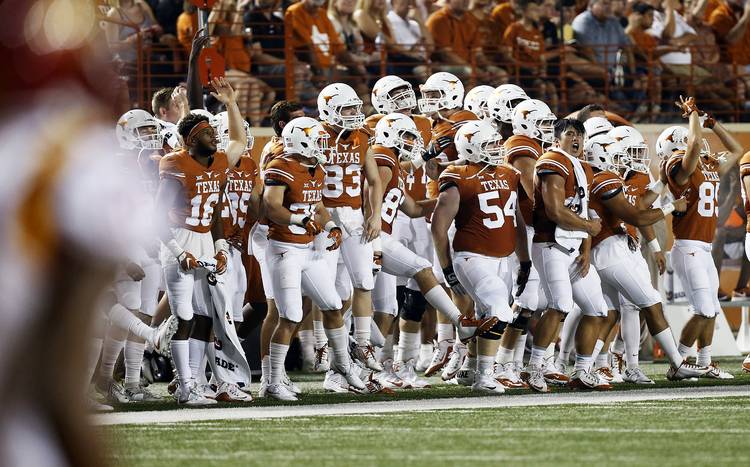 Texas players cheer for a kickoff against Iowa State in the third quarter at Royal-Memorial Stadium, Saturday, Oct. 15, 2016. (Stephen Spillman / for American-Statesman)

Sometimes the best plays are the ones you least expect to happen.

Texas freshman offensive lineman Tope Imade certainly didn’t think he’d be scoring when he pulled from left guard during a Longhorns practice, but that’s exactly what happened in a video he shared via Twitter on Wednesday afternoon.

Admittedly, I had to watch this through three times to fully comprehend what happened. If you’re confused, too, here’s the best I can do at a recap:

As you’re looking at it, Imade is lined up to the right of the center. The ball actually starts out in quarterback Jimmy Greenwood’s hands, and it looks like the play was supposed to be a slant over the middle.

Imade pulls behind the center, and as the defender jumps the route he winds up right in the action.

The ball is tipped right into Imade’s hands, and you can almost see his eyes get wide as saucers as he looks up and sees green in front of him. It’s unclear if the play was blown dead — the defensive players clearly don’t try to tackle the 6-foot-4, 322-pound lineman — but Imade wasn’t about to waste an opportunity to score a touchdown.

Was it legal? I’m no rules expert, but since the ball was tipped and Imade appears to be standing on the line of scrimmage when it was thrown, I think so. But it’s practice, so who really cares?

This play is pure gold.

Texas freshman Jarrett Allen comes in at No. 37 on CBS Sports player rankings