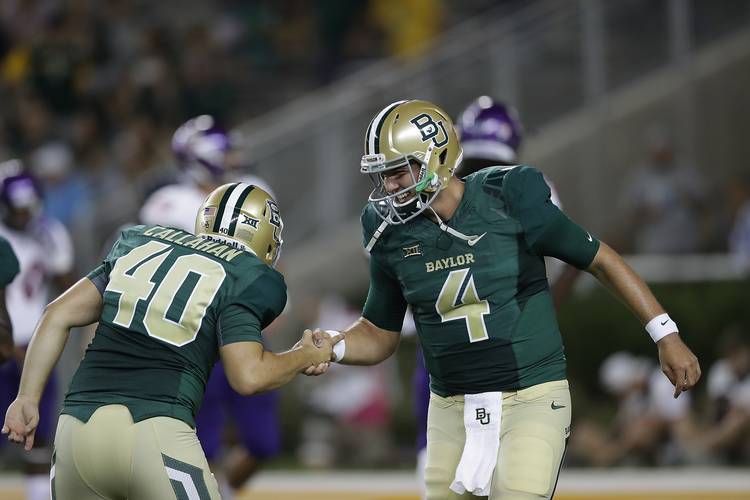 WACO, TX - SEPTEMBER 02: Zach Smith #4 celebrates a touchdown with Chris Callahan #40 of the Baylor Bears against the Northwestern State Demons at McLane Stadium on September 2, 2016 in Waco, Texas. (Photo by Ronald Martinez/Getty Images)

Under normal circumstances, Saturday would have been circled, highlighted and otherwise celebrated on every Texas fan’s calendar.

Eighth-ranked Baylor (6-0, 3-0 Big 12) is coming to Royal-Memorial Stadium, but there’s not much excitement. The Longhorns are 3-4 and are fighting an uphill climb to reach bowl eligibility. But hasn’t this game reached “throw the records out” status by now?

Art Briles is long gone, but do not underestimate the Bears’ anger toward the Horns. They want to come in and thrash Texas on its own home turf.

Q: After all the trouble Baylor is in, lost the head coach, lost recruits and deserve every punishment the NCAA can deliver, they are a ranked team and performing at a great level. Then there’s Texas — my school, my team with one of the best recruiting classes but can’t win a game. Now do you think Texas can beat Baylor?? Hell no. It has been painful to watch what Texas has become.

DAVIS: Rick, the only consolation I can offer is that your comments reflect those of the masses. At least that’s the overall tone of the comments I receive for the weekly mailbag. The Bears are indeed undefeated, although they are not immortal. I was there at McLane Stadium earlier this year and saw Oklahoma State push Baylor around pretty good. The Cowboys lost because of self-inflicted mistakes, including two turnovers at the goal line.

One thing Baylor does well is play pass defense, something few teams in this league can say. Defensive coordinator Phil Bennett’s unit allows 160.8 passing yards per game. Of course, it’s easy to pile up beautiful stats against Northwestern State, SMU and Rice — Baylor’s three non-conference foes. Coach Jim Grobe’s bunch has yet to play Texas Tech, Oklahoma or West Virginia. Let’s check back on their defensive stats in late November.

Q. Baylor is playing NOBODY. Give me a break…worst 6-0 team in America

DAVIS: Let’s take a deeper dive into Baylor’s 6-0 record. Northwestern State, which is not an FBS school, is 1-6. SMU is 3-4, but did just beat No. 11 Houston. Rice is 1-6. Among conference foes, Oklahoma State is 5-2. Iowa State and Kansas are both 1-6. So yes, Baylor has played only one team that currently has a winning record. Take it for what it’s worth.

Q. Baylor better than people think and we shall see Saturday.

DAVIS: I’m not saying you are right, Christopher, or not. We’ll see at Royal-Memorial Stadium.

Q: Texas doesn’t deserve a bowl. Let’s worry about not being an embarrassment first. Second generation Longhorn grad and Horn for life, but this is depressing.

DAVIS: Saturday is certainly a huge game for the Longhorns and coach Charlie Strong. There will be a sizable crowd of influential people on hand because of other events on campus, and it’s Baylor — a game that many consider a real rival. Strong simply cannot afford to have his team fall flat on its face against the Bears. No way, no how. Sources around campus still believe UT President Gregory L. Fenves will allow Strong to finish the season, no matter how bad things may get. But let’s not forget Strong still controls his fate. If the Horns can turn things around, they can still finish with eight wins. If Texas is going to change coaches, it’s been my experience that nothing really happens officially until the coach secures a losing record in his final year. The Horns still have five games remaining.

Q. I’m a staunch supporter of Charlie, but also believe no matter what happens from here out, he’ll be released at season’s end. My personal choice to replace him would be (Washington coach) Chris Peterson, but I’m just a fan that loves my Horns

DAVIS: I’ve been told that whenever influential donors get together for pre-game parties and the like, they’re kicking around two names — Houston’s Tom Herman and Florida State’s Jimbo Fisher. That’s not to say they wouldn’t examine Washington’s Chris Petersen, though. All options should be on the table. One donor told me Texas AD Mike Perrin should make a call to Oklahoma and see about Bob Stoops. Maybe this is all premature. Perhaps Strong gets things turned around. But this what-if parlor game is always interesting, and will only intensify if things continue going south.

.@CoachTomHerman:"I'm done being the media police-chasing down erroneous reports," in response to rumors Monday on Twitter involving Texas pic.twitter.com/aPZbnvbg7u

Q. Nobody wants to step in the mess that has been made by the powers that be at UT.

DAVIS: I included this question because it has popped up repeatedly over the last few weeks. There are people out there who believe Texas is still too messy internally to ever become successful. I would argue that’s not the case. Fundraising is strong, and the school has signed up more Longhorn Foundation members than ever before. Perrin, for all of his administrative learning-as-he-goes quirks, has quieted things down. Athletic department infantry workers aren’t as up in arms like they were under former AD Steve Patterson. Texas is still a glamour school, but if anyone thinks that UT will figure things out because “We’re Texas,” they’re in for a huge surprise. That tired cliché — and way of thinking — is long past its expiration date.

Q. The secret to success in many endeavors is to blend in and not be seen. Not, however, as an AD at UT. Please check your desk for any notes DeLoss may have left behind for you.

DAVIS: Just recently, we learned that Perrin and former AD DeLoss Dodds still talk. At an event to honor DeLoss and Mary Ann Dodds, DeLoss said Perrin phoned him with the results of the Big 12 expansion meetings. Who knows what else they discussed? Who knows how often they talk at all? But I’m betting that Dodds would make himself available to Perrin at all hours of the day.

Q. Last week K-State killed us with their screen passes because they had a blocker in front of the receiver. Wish we could do that. Also, we have a very good QB and fast receivers. How about a quick slant once in a while? We don’t have to go for the long bomb most of the time when passing.

DAVIS: My biggest on-field impression about Kansas State’s offense was how well the receivers blocked UT’s defensive backs. It was terrific. That helped the Wildcats turn quick receiver screens into sizable gains. You know what else we haven’t seen from the Sterlin Gilbert offense? There hasn’t been much of a running back screen game. You haven’t seen D’Onta Foreman catch balls in the flat. And I’ve been slightly disappointed with the lack of creativity. Why not use Jerrod Heard in the wildcat? Why not have Devin Duvernay run an end-around? Where’s the pop pass out of the 18-Wheeler package? Outside of one touchdown catch against Oklahoma State, where have the tight ends been hiding? I’m a full believer that Gilbert knows what he’s doing. But he’s also trying to succeed in a real pressure-cooker situation.