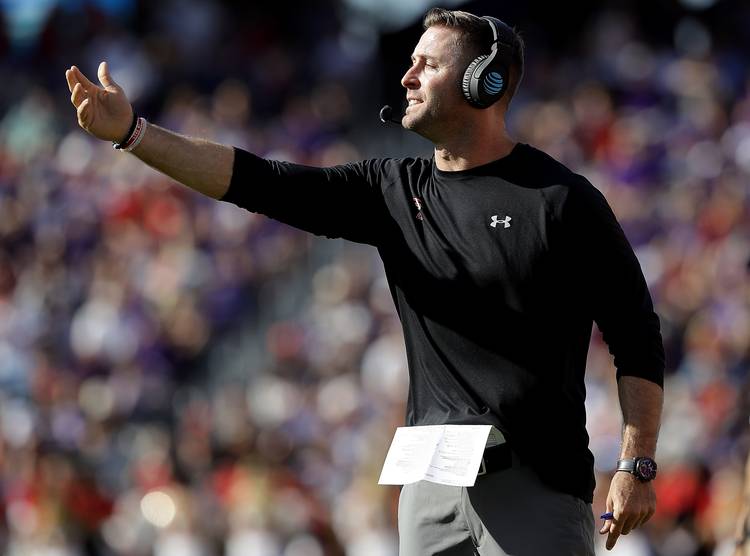 Head coach Kliff Kingsbury of the Texas Tech Red Raiders in the first half at Amon G. Carter Stadium on October 29, 2016 in Fort Worth, Texas. (Photo by Ronald Martinez/Getty Images)

Kingsbury is probably more concerned about Hager as one of Texas’ top pass rushers. The sophomore has five sacks this season and is third on the team with 43 tackles.

“He apologized, so it’s a non-issue,” Kingsbury said on Tuesday, according to the Lubbock Avalanche-Journal.

Kingsbury on Hager flap noted Britt and Bryce Hager "were both great players and that kid plays hard. He apologized, so it's a non-issue."

I asked Kingsbury if he remembers, during his playing days, an opposing player saying something that registered in the locker room. (cont.)

Kingsbury: "With social media, they hear a lot more than we did. We'd hear it from somebody’s ex-girlfriend. It's a little different now."

The Big 12 office had no comment on Tuesday when asked about Hager. “Absent any public announcement, the Conference office does not disclose specifics related to Sportsmanship and Ethical Conduct policy matters,” league spokesman Bob Burda said.

For his part, Hager apologized on Monday via a UT press release to reporters.

“I have too much respect for Patrick Mahomes and every quarterback I play against to ever do that,” Hager said, according to the statement. “That’s not what I’m about, not the way I was raised and not the way we play football at Texas.”