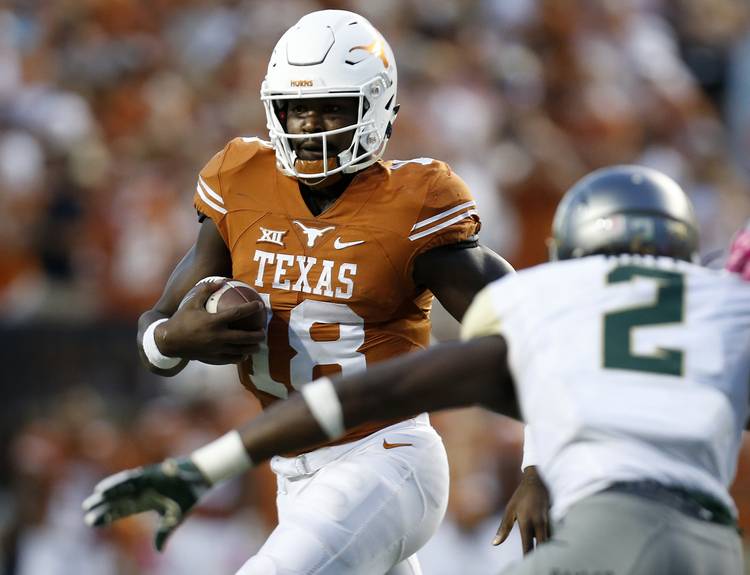 The 18-Wheeler needs a tune-up.

Texas coach Charlie Strong indicated there would be changes to the popular short-yardage package featuring Tyrone Swoopes after the senior struggled against Baylor.

Nobody should expect Strong or offensive coordinator Sterlin Gilbert to detail what those changes might be. However, Gilbert said the package does have some wrinkles. Fans simply haven’t seen any yet.

Asked why there haven’t been any pop passes or surprises from the 18-Wheeler, Gilbert said, “We’ve got stuff that’s ready. When the time arises, then we’ll use it.”

Swoopes has thrown only one pass out of the 18-Wheeler — an incompletion to tight end Caleb Bluiett in the season opener against Notre Dame. Most of Swoopes’ carries out of the package were straight-forward running plays. Initially, Swoopes was almost unstoppable.

But opposing defenses are now putting up road blocks. Swoopes ran as a quarterback and took handoffs as a running back against the Bears. He finished with seven carries for just seven yards. Swoopes was stuffed on a critical two-point conversion attempt and pushed wide right for a 4-yard loss on a late third-and-2.

“If you look at it the other night, and Tyrone will tell you, he missed (the hole),” Strong said about the two-point conversion. “If he just goes outside, it’s there. He’s going to get the two points, and he just tried to bang it up in there and one of the linebackers slipped and then hit him.”

Strong also said that Swoopes will continue to take some handoffs to give starting running back D’Onta Foreman a rest at times.

“I’m definitely trying to talk to him about certain things,” Foreman said. “Driving his hips, trying to stay low and move his feet. It’s different from when we’re in the 18-Wheeler package and when you’re at running back. You don’t have many blockers going to one side for you. You’ve got to try to create holes sometimes that aren’t there.

“That was his first game,” he added, “and I was just pretty impressed with the effort he gave.”

Also, Gilbert acknowledged he has no issues with splitting Foreman out wide with Swoopes as the 18-Wheeler. Texas lined up with that formation twice against Baylor, mostly just to see how the Bears would react.

“We’ve got reasons for why we do things,” Gilbert said. “It’s just another set that he’s on the field. It’s just a thing that we put him out there to see what they were going to do, and obviously we got some idea with it.”