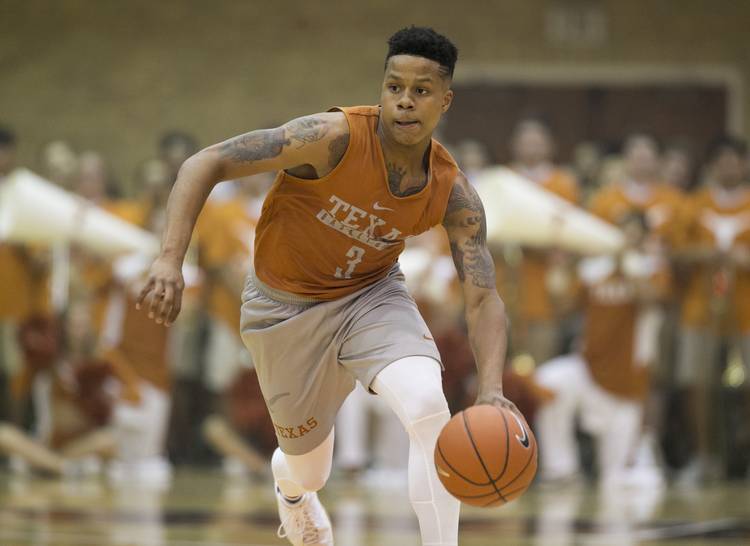 The NCAA allows for only one preseason game. Best make it a good one.

The Longhorns were a little short-handed in their lone dress rehearsal for the season, but Texas made it work in a relatively easy 95-55 win over Angelo State.

A sparse Erwin Center crowd watched what really amounted to a competitive practice. But there was plenty to see as coach Shaka Smart’s two McDonald’s All-Americans had strong performances with extended playing time.

Freshman Andrew Jones found Jacob Young in the corner for an open 3-pointer. He threw down a vicious two-handed jam as part of the Horns’ 21-0 run. Just before halftime, Jones threw a great touch pass to Jarrett Allen for a layup and then threw a lead pass to Young for another score.

Jones, a 6-foot-4 guard from Irving, finished with 17 points, five assists and just one turnover in 33 minutes.

Allen, the much-touted freshman from St. Stephen’s, had a double-double early in the second half and finished with 14 points and 11 rebounds before fouling out with 4:08 remaining.

The bench erupted when freshman James Banks got on the floor for a loose ball. He tipped in an Allen miss and went 3 for 3 from the free throw line in the first half. They really came unglued late in the second half when Banks made a strong post move and finished with a two-handed jam en route to 10 points.

Young, a 6-2 scorer from Houston, will take a lot of 3-pointers this season. More like A LOT. Capital letters seem appropriate with him. But all of his shots come in the offensive flow and never really seem forced. Young was 4 for 8 from 3-point range and finished with a game-high 21 points. When the building starts filling up and Young hits from downtown, it could be a real catalyst.

Allen will touch the ball a lot this season, as he should. But that also means a possibility to get fouled. In his first public game against a different opponent, Allen went 3 for 11 (27.3 percent) from the free throw line. Overall, the Horns were 17 for 33 (51.5 percent). It’s nothing to worry about now, but Smart will like to see those numbers improve.

Salute to the arena officials, DJ Mel, the mascot Hook ’Em or whoever was responsible for the updated banners hanging in the rafters to honor UT’s retired jerseys. T.J. Ford, Slater Martin and Kevin Durant never looked so good.

Texas got some updated banners in the rafters to honor those with retired jerseys. pic.twitter.com/RbezTALWj4

Sophomores Kerwin Roach and Tevin Mack were suspended for the game for an undisclosed violation of team rules. With those two out and Mareik Isom sideline after an ankle procedure, Smart had only seven scholarship players at his disposal.

The Longhorns now have just over a week to tie up any loose ends before the season opener on Nov. 11 at home against Incarnate Word. Nobody’s packing for an international destanation this season. Smart was ecstatic about the early schedule. Texas will play the opener followed by Louisiana Monroe (Nov. 14) and Eastern Washington (Nov. 17) before leaving town on the team’s first road trip.