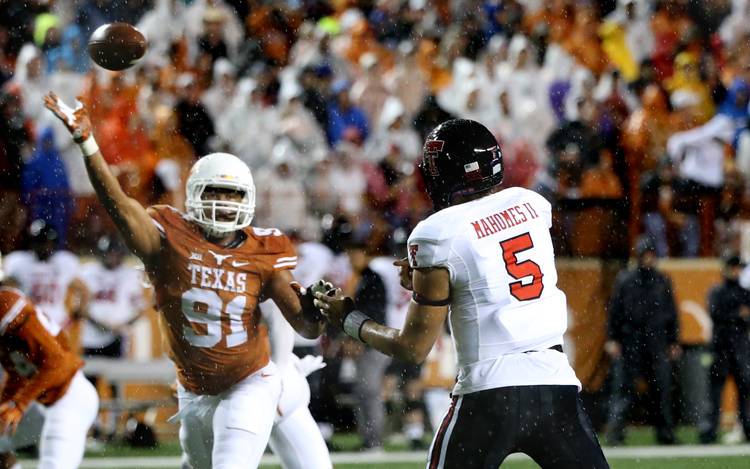 Texas's Bryce Cottrell tries to get a hand on a pass by Texas Tech quarterback Patrick Mahomes II during the first half at Royal Memorial Stadium on Thursday, November 26, 2015. DEBORAH CANNON / AMERICAN-STATESMAN

With a name like Chancellor’s Spurs, it’s almost a given that the Texas-Texas Tech rivalry has included some shootouts.

In fact, some of the most thrilling affairs between the Longhorns and Red Raiders have occurred since the teams began playing for the traveling trophy in 1996. And there have been some doozies.

Here are the five — well six, actually, by virtue of a tie — highest-scoring games between Texas and Texas Tech.

Perhaps a sign of the times, this list travels in mostly chronological order. The 1992 and 1998 games each saw 77 points scored.

In John Mackovic’s first season, the Longhorns rode into Lubbock ranked No. 25 and took a 22-10 halftime lead. The Red Raiders scored 23 points in the second  half, but it wasn’t enough. Texas rushed for 340 yards, including 155 on 16 carries by Adrian Walker.

Coincidentally, the Longhorns and Red Raiders combined for the same amount of points six years later — in Mack Brown’s first trip to Jones Stadium. The 18th-ranked Longhorns tied the game at 35 with 2:18 left on a pass from Major Applewhite to Wane McGarity, but the Red Raiders drove for the game-winning score.

Current Texas Tech coach Kliff Kingsbury will look back fondly on this one. Texas fans will not.

Kingsbury threw for 473 yards and six touchdowns, including the game-winner to Taurean Henderson with 5:41 left. The No. 4-ranked Longhorns still had a golden opportunity after Ivan Williams’ long kick return, but Chris Simms threw an interception on the very next play. The loss cost Texas a spot in the Big 12 Championship, which Oklahoma ended up winning.

The next year’s game provided just as much excitement, but this time the Longhorns narrowly avoided getting upset at Royal-Memorial Stadium.

After trailing 35-21 late in the third quarter, the Red Raiders rallied to take a 40-35 lead with 2:03 left. In a bold move, Brown decided to bring quarterback Chance Mock in cold off the bench to replace sophomore Vince Young. Mock rewarded his coach’s confidence by driving the Longhorns 86 yards for the game-winning touchdown.

Watch the final drive starting at the 2-hour, 34-minute mark:

Texas and Charlie Strong saw their bowl hopes fade as Jakeem Grant dashed 40 yards to the end zone with 2:41 left. In truth, there wasn’t a lot of defense played by either side. The Red Raiders piled up 665 yards and the Longhorns had 467, including 276 rushing yards and four touchdowns from Chris Warren III.

Might we see something similar this year? The odds are pretty good. Texas Tech and Oklahoma combined for an NCAA-record 1,708 yards two weeks ago as the Sooners won 66-59 in Lubbock. The Longhorns and Red Raiders both rank near the bottom of the FBS in total defense.

In the second-highest scoring game in Texas history, the teams combined for 102 total points as the Longhorns held on. The fourth quarter in particular was out of control.

Texas led 35-20 after three quarters, and convention would say to hand the ball to Jamaal Charles, use up the clock and get out with a win. That’s not what happened. Instead, the teams combined for 47 points in the final 15 minutes, with Texas gaining a 24-23 edge.

The Red Raiders never really threatened the Longhorns’ lead — they pulled within 45-35 with 5:21 left.

I couldn’t find a video from the game on YouTube, presumably because the defensive coaches from both teams conspired to wipe the evidence form the internet.