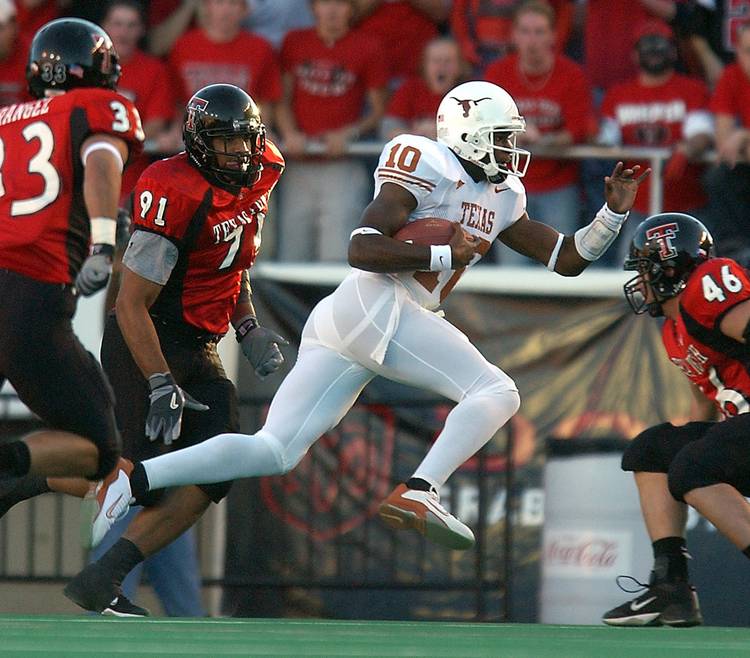 Believe it or not, there was a time when Texas versus Texas Tech box scores didn’t look like math equations.

Harken to the days of Darrell Royal and Jim Carlen, and what you’ll find is simple addition. 28-0, 25-20, 28-12, 26-3; those games were far cries from the shootouts that have come to define the Chancellor’s Spurs rivalry.

RELATED COVERAGE: The five highest-scoring games ever played between Texas and Texas Tech

But that’s not why we’re here. The games of recent past have led to some videogame numbers, especially at Jones Stadium. These Longhorns are still haunting nightmares on the Western plains:

The first of three on this list that came in a losing effort, Williams tormented the Texas Tech secondary in the most famous game in series history. Michael Crabtree got the last laugh with his spectacular game-winning touchdown, but Williams actually outplayed him. He only caught four passes, but they went for 165 yards and two touchdowns — including a 91-yard strike that helped turn the tide in the fourth quarter.

Colt McCoy should also get an honorable mention for his performance that day. He completed 20 of 34 passes for 294 yards, but it was Red Raiders quarterback Graham Harrell’s day.

Another receiver who went big in a loss. McGarity had six catches for 174 yards and four touchdowns, and went over 1,000 yards for his career. He’s probably still wondering how the Longhorns lost. He caught touchdown passes of 67, 47 and 31 yards, plus a 12-yard score that tied the game at 35 with 2:18 left.

You can catch a few of the highlights in the video below:

I thought about separating these performances by Cedric Benson and Vince Young, but why bother? Shout out to the Texas offensive line, which allowed these guys to rush for a combined 326 yards in a 51-21 blowout.

Benson carried the ball 38 times for 168 yards and a touchdown, while Young tucked it 25 times for 158 yards and four scores. Suffice it to say the pair was virtually unstoppable.

I know what you’re thinking, and I get it. The quarterback’s job is to win the game, and Simms cost his team a chance to do that with an interception on the final drive. But had he not thrown that pass, Simms’ performance in Lubbock might have gone down as one of the greatest in Longhorns history.

He finished the day 24-for-37 through the air for 345 yards, four touchdowns and the one infamous pick. It probably still haunts him.

Consider that Texas had 34 yards to go for a potential game-winning touchdown. There was still 5:28 on the clock, too. As it stands, Simms’ 345 yards that day rank 18th for a single game in program history. Give him 34 more, and it would be in the top 10 — one of two on the road.

Football isn’t a game of ifs and buts. But… Simms was still pretty darn impressive that day. And almost flawless. Almost.

Ricky Williams was two years gone and Cedric Benson was still a year away, but Hodges Mitchell was just fine. And the undersized back who had back-to-back 1,000-yard seasons in 1999 and 2000 shredded the Red Raiders in a 29-17 win.

Mitchell had 45 carries for 229 yards and two touchdowns. It wasn’t like he was ripping off big runs, either. His longest carry was for 22 yards, and he averaged 5.1 yards per tote. Forget a heavy dose, Texas Tech got Mitchell shoved right down their throats.

The performance ranks 16th all-time, and it was 15th until D’Onta Foreman bumped Mitchell on Saturday with his 250 yards against Baylor.

This year, Texas Tech ranks 104th in the FBS against the run, and Foreman will be the best running back the Red Raiders have faced yet. Is he about to blow up this list, too?

Whys of Texas: Foreman, Dickson should be national award contenders

Episode 33 of On Second Thought: ESPN’s Kirk Herbstreit on Charlie Strong and his ‘cesspool’ comment