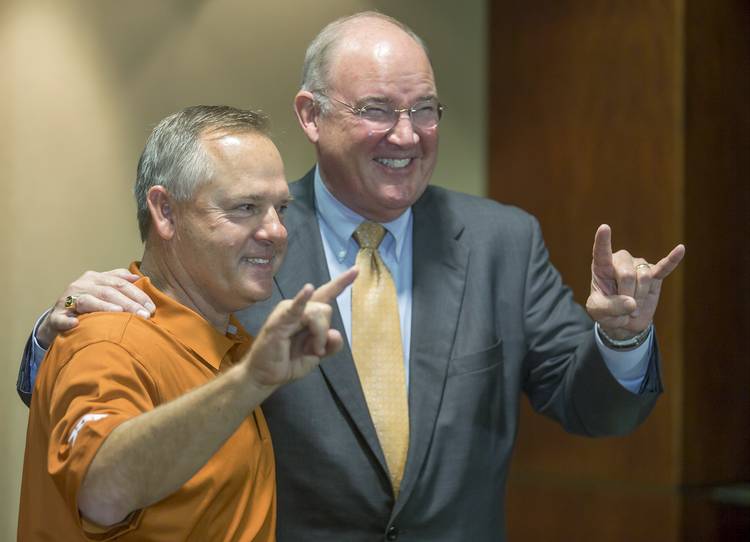 University of Texas Athletic Director Mike Perrin and new head baseball coach David Pierce flash the Hook'em sign as they pose for a photo after a press conference at the Centennial Room of Bellmont Hall on Thursday, June 30, 2016. RICARDO B. BRAZZIELL/AMERICAN-STATESMAN

The UT System Board of Regents are set to formally approve a six-year, $4.5 million contract for new Texas baseball coach David Pierce during next week’s meeting.

The broad framework was known for months, but specifics finally emerged via the UT regents agenda book posted online Friday. Pierce will receive $500,000 in guaranteed salary for the 2017 season and $550,000 for 2018.

Former UT coach Augie Garrido, the all-time leader in NCAA Division I victories, earned $1 million in his last season with the Longhorns.

Pierce will receive a $600,000 guaranteed base salary from 2019-22. During those seasons, he will also receive an additional $150,000 from the school’s Nike shoe and apparel contract, consulting and “other services requested” by UT-Austin.

Pierce will get an additional $100,000 those final four seasons for licensing rights to his name, image, likeness, signature and photograph rights. He will receive an additional $50,000 annually for sports camps and clinics.

Pierce can earn a maximum annual amount of $195,000 in performance bonuses or various coaching awards, according to the contract.

The university will also transfer $1 million to Tulane to pay Pierce’s buyout with his former employer.

Longhorns in the NBA: Through Nov. 3