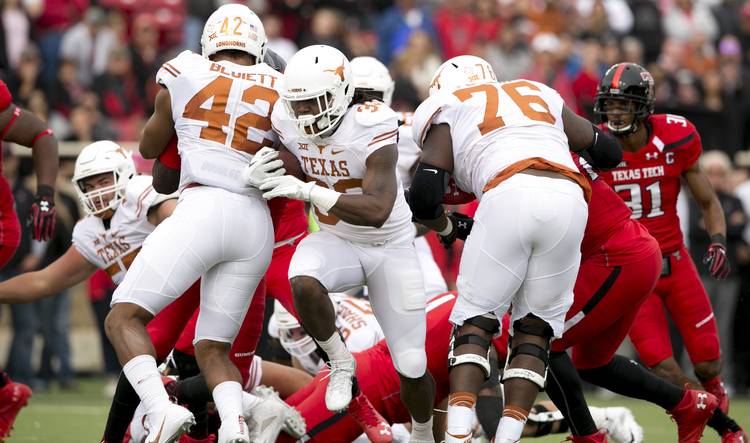 In one of the most remarkable plays you’re likely to see, Texas Tech flipped the momentum on Texas by stripping Longhorns running back D’Onta Foreman of the ball and returning it 100 yards for a touchdown.

Watch the insanity below.

That’s Red Raiders defensive back Douglas Coleman who pulled the ball out of Foreman’s left hand and ran it the other way.

But wait… Was Foreman across the goal line before Coleman pulled it out?

The play was upheld after review, and Texas Tech extended its lead to 23-14 with 7:50 left in the second quarter. Only time will tell what affect the play ends up having on the outcome of the game.

Adding insult to injury, the Longhorns had a touchdown called back earlier in the drive on a chop block penalty that nullified Tyrone Swoopes’ 9-yard pass to Caleb Bluiett.

I've never seen a coach get so many bad breaks. That would have been the play of the year for Texas. Then it goes the other way for six.

Not only that, but replays showed that Coleman stepped out of bounds before crossing the goal line for the touchdown.

And this? RT @McDowells_Cough: @edsbs dude was out of bounds on the return. https://t.co/4rFraPS3Bq