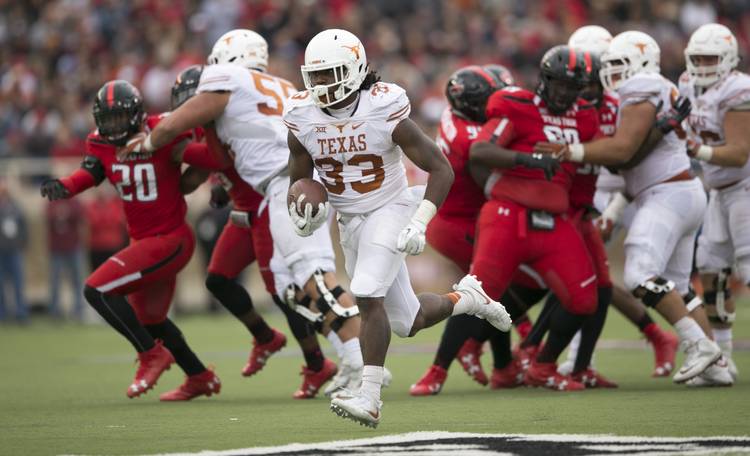 The “D’Onta Foreman for Heisman” chatter has been getting louder each week in Austin, but it finally grew national legs after his 341-yard performance at Texas Tech last Saturday.

Foreman now leads the nation in rushing yards per game (180.8) and is second in total rushing yards despite missing the Longhorns’ game against UTEP. He’s now been featured in one Fox Sports expert’s top five and was seventh on ESPN’s most recent “Heisman Watch” list.

All that is fine and dandy, but what this campaign really needs is a trendy hashtag. What’s that you say? There already is one?

This week, Texas has started using “#HEISforeMAN” in it’s tweets about the star running back, including a video posted Wednesday morning. It’s clever, it’s catchy and it’s started gaining some traction.

He is D'Onta Foreman.
He is The 100-Yard Man (10 straight).
He is The Nation's Leading Rusher (180.8 YPG).#HEISforeMAN pic.twitter.com/OkyByqeYNp

He Is D'Onta Foreman.
He Is The Nation's Leading Rusher (180.8 YPG).#HEISforeMAN pic.twitter.com/p3SjhzB1JE

Here’s a sample of tweets and memes that fans have added to Foreman’s growing Heisman support.

People need to show this man some love. The complete running back and was recruited as a 2-star….. #HEISforeMAN @D33_foreman https://t.co/sHilMcZDYV

With all respect @jnunn02 you forgot @D33_foreman who leads the nation in ypg and is 2nd overall in rushing with 1 less game #HEISforeMAN https://t.co/27zvUzO7Yj

D'Onta Foreman—
Leading nation in YPG
#2 in total yards, even tho he missed the UTEP game#Hookem#HEISforeMAN
🤘🏼👊🏼🐂 pic.twitter.com/WG6EzTm2z0

Bohls: Would an 8-4 record give Charlie Strong a pay raise?