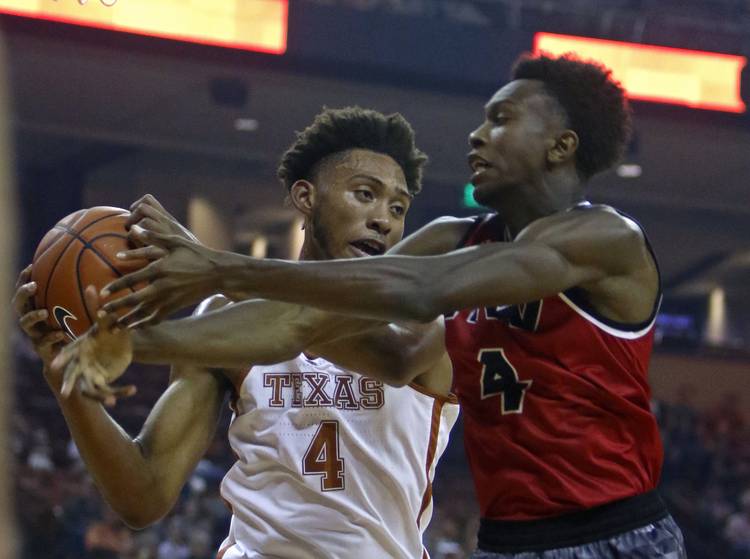 Eight was enough for No. 21 Texas in a 78-73 season-opening win over Incarnate Word. Eight players, that is.

Coach Shaka Smart had only seven scholarship players and a walk-on at his disposal to begin his second season in Austin. Sophomores Kerwin Roach and Tevin Mack sat with a one-game suspension, and graduate transfer Mareik Isom is getting over an ankle procedure.

So UT’s four freshmen, including five-star center Jarrett Allen of St. Stephen’s, got all the minutes they wanted. The newcomers got themselves into a nail-biter, too.

The Cardinals chopped an 18-point deficit down to two with 7:14 remaining and had some real momentum when Jalin Hurt scored off a runout. A stunned crowd of 10,922 didn’t know how to react when Sam Burmeister drained a 3-pointer with 2:33 left to give Incarnate Word a 67-66 lead.

Kendal Yancy gave the Horns a one-point lead with two free throws. Then, the senior scored again after a good feed pass from Allen. UIW’s next possession came up empty, and after a long scramble, UT’s Jacob Young found Andrew Jones for a layup. Texas suddenly had a 72-67 lead with 32 seconds left.

The second year of the Shaka Smart experience begins at Texas. pic.twitter.com/JDp7kTz3U4

The Fro Bros are off and running. Allen finished the night with 16 points and 12 rebounds in his first double-double. He was 7 for 11 shooting and somehow managed to hang on to a loose ball late in a hold-your-breath moment. His sidekick, James Banks, had five blocks, a record for a UT freshman in his debut. Banks also had nine rebound and just two points.

Before the game, several former Longhorns tweeted their support for the current team as they begin the five-month journey.

Best of luck to my boys in burnt orange tonight! #HookEm

Big ups to my longhorns tonight!

Texas students also had a strong turnout, even on a Friday night. They saw Allen get his first collegiate bucket by scooping up a loose ball in the lane and scoring with ease. They saw Banks throw down a two-handed flush off a fast break. And they saw Jacob Young drain a 3-pointer from the left corner, giving the Horns a 10-point lead in the first half.

It was widely expected for the freshman to be nervous. But senior Shaq Cleare getting three fouls in the first half? He eventually fouled out. Yancy throwing the ball away on an inbound pass? Sophomore Eric Davis getting two fouls and a turnover early? There’s going to be plenty of mistakes from the youngsters. Texas’ veterans can’t be this sloppy, especially against over-matched competition.

The Longhorns next play two home games as part of the Legends Classic tournament. Monday’s game against Louisiana Monroe begins at 7 p.m. Texas will then host Eastern Washington at 7 p.m. Thursday before heading to Brooklyn for two games at the Barclays Center on Thanksgiving week.

Shaka Smart: Donald Trump victory was ‘a slap in the face’