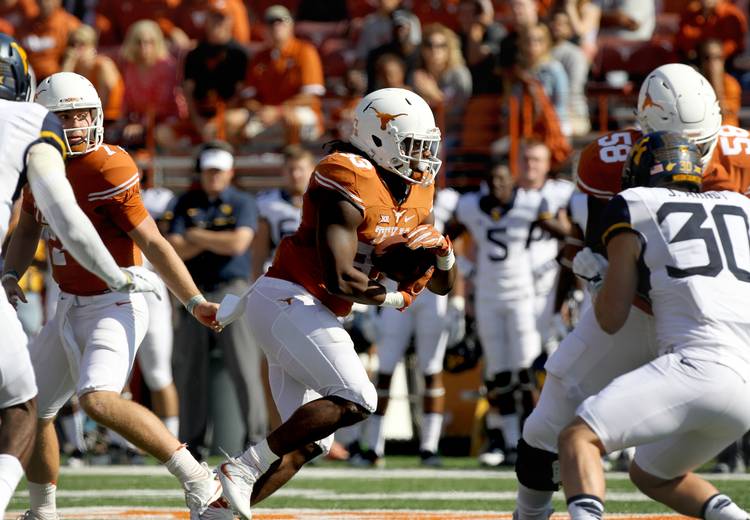 This is easily Texas’ biggest home test of the season.

West Virginia is as good as its record will indicate. The Mountaineers lead 17-13 but Texas has the momentum with 10 unanswered points to close the half.

The Longhorns lost Jefferson in the first quarter to a head injury. He’s out for the game. That puts the onus on Edwin Freeman, Anthony and Tim Cole to pick it up . WVU coach Dana Holgorsen is doing a great job of isolating his wideouts against the Horn LBS in space and QB Skyler Howard has been on the money.

After the play-calling gaffes at Lubbock, the Horns didn’t play Tyrone Swoopes and his 18-Wheeler package in the first half, deciding instead to go with D’Onta Foreman on a pair of fourth-down carries. Either Strong and offensive coordinator Sterlin Gilbert are reading the Statesman or they just finally realized it’s a much better idea to keep their best player on the field on the most important plays.

The nation’s most productive running back found the sledding a bit tougher than it’s been against the league’s most balanced defense but he did break off a 32-yarder in the second quarter to set up Texas’ first touchdown. Foreman already has 20 carries for 114 yards , tying Longhorn legend Earl Campbell with his 11th straight game over the century mark. He’s one of those guys who gets better the longer the game goes. He looks like he’s lathered up for another big performance.

Buechele up and down

Shane Buechele has gotten away with a couple of questionable throws into double coverage but he really came on in the second quarter with a 10-yard TD run and a couple of nice throws to beat the blitz. WVU defensive coordinator Tony Gibson is a master of disguised coverages. It’s a nice challenge for a freshman QB.

The Horns are right where they need to be. They took an early hit from WVU but controlled the action in the second quarter and got some stops. I picked them to win before the game. Great opportunity to make that happen.