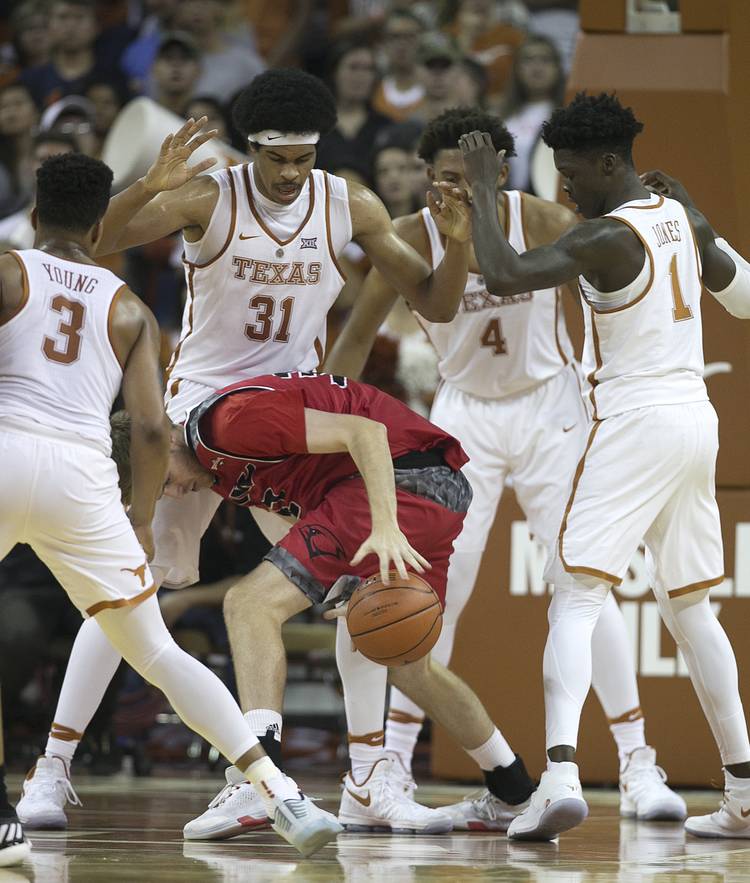 Texas players put pressure on Incarnate Word's Jerred Kite during the first half of their game at the Erwin Center on Friday, November 11, 2016. DEBORAH CANNON / AMERICAN-STATESMAN

About the Longhorns: Texas captured its 15th consecutive home-opening win with a 78-73 victory over Incarnate Word last Friday. But the Cardinals made it interesting, taking a one-point lead with 2:33 remaining. Still, it was a solid debut for UT’s freshmen big men Jarrett Allen and James Banks. Allen, the St. Michael’s product, had 16 points and 12 rebounds. Banks had nine rebounds and five blocks. … Freshman Jacob Young was 4 for 7 shooting and had 10 points in his debut. … The coaching staff has confidence in walk-on Ryan McClurg, a senior who’s seen it all. The 6-6 forward may come in handy as a possible fourth interior player this season.

About the Warhawks: Don’t expect ULM to be intimidated. This is a program with a 28-4 home record the last two seasons, including a perfect 13-0 mark last season. ULM started this year’s campaign with a 96-63 demolition of Centenary. Jordon Harris came off the bench to score a team-high 23 points, and three others finished in double figures. … Nick Coppola is just the fifth player in school history with 100 career starts in 100 games. He had 14 points, seven rebounds and seven assists in the opener. … The Warhawks have three players from Australia on the roster — Sam Alabakis, Sam McDaniel and Kiir Deng. … ULM was picked to finish eighth in the Sun Belt.

Bohls: My ballot has Alabama, then everyone else

Texas linebacker Malik Jefferson being checked for a concussion