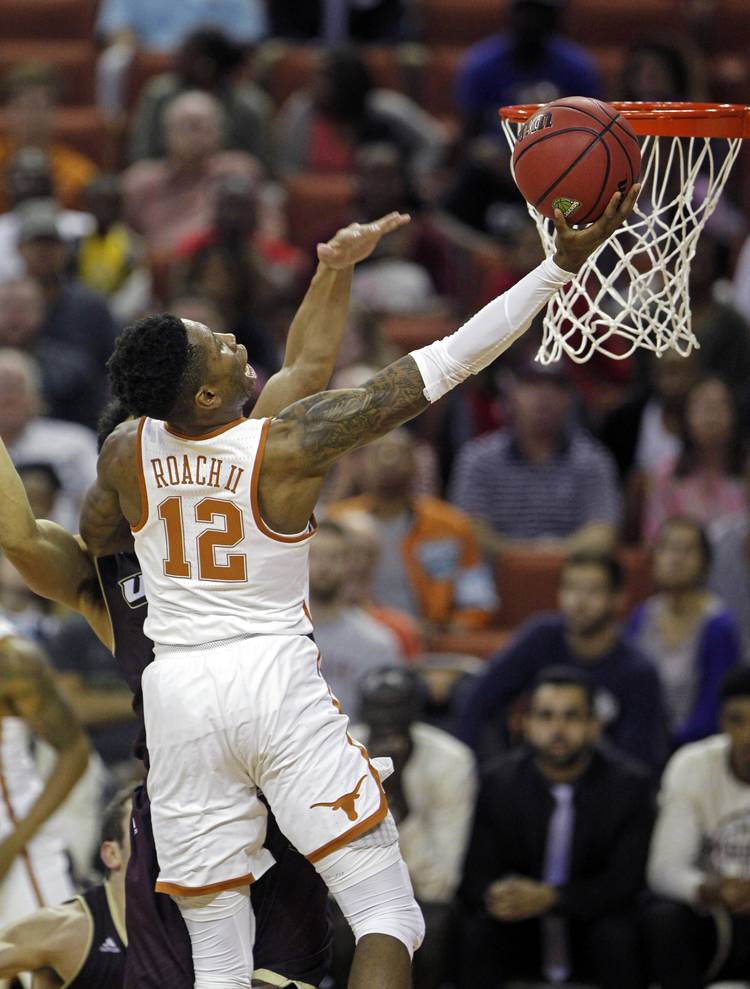 Texas guard Kerwin Roach, Jr. (12) lays the ball up during the first half of an NCAA college basketball game against Louisiana Monroe, Monday, Nov. 14, 2016, in Austin, Texas. (AP Photo/Michael Thomas)

No. 23 Texas was close to full strength Monday and looked far sharper in a 80-59 win over Louisiana-Monroe at the Erwin Center.

Sophomores Tevin Mack and Kerwin Roach were suspended for the season-opening win over Incarnate Word. But they were back in action against the Warhawks, and both took full advantage of a fresh start.

Mack was 4 for 6 from 3-point range and finished with 14 points. His 3-pointer from 5:20 remaining was a key moment in a 13-3 surge that gave the Longhorns some breathing room down the stretch.

Mack hit another 3-pointer with 4:05 remaining as the run ballooned to a 22-3 Texas advantage.

Roach finished the night with 11 points on 4 of 7 shooting. Two others finished in double figures as Texas (2-0) shot 50 percent from the floor overall.

Texas seniors Kendal Yancy and Shaq Cleare both had strong games after uneven performances in the opener. Yancy was 5 for 6 shooting and finished with 12 points. Cleare had eight points and six rebounds in 22 minutes.

It’s hard to tell if this is anything to be worried about yet, but Texas is so-so at the free throw line. The Horns hit just 70 percent of their foul shots on Friday. This time around, they were 13 for 21 at the stripe — a not-so-impressive 62 percent. This coming off a season where Texas finished dead last in the Big 12 in free throw shooting, hitting a miserable 66.6 percent.

After Friday’s season opener, Texas freshman Jarrett Allen said his baseline measurement each game is a double-double. That’s supreme confidence in a player with, until Monday, only one college game under his belt. Well, Allen didn’t get there against ULM. He finished with eight points and three rebounds.

However, Allen flashed real five-star talent on a post move that ended with a thunderous one-handed dunk. Every night out may be something new for the 6-foot-11 forward from Round Rock.

Big time move right here by Jarrett Allen for the jam. ULM has no answer for his size pic.twitter.com/wor4iEoHud

The Longhorns can’t afford to give away any team second chances. Midway through the second half, the Warhawks had a 13-5 edge on offensive rebounds. The Horns pulled a little closer as the second half wore on. But ULM finished with a 17-9 advantage in that category. To UT’s credit, ULM couldn’t do much with all those extra chances anyway. The Warhawks had only one player in double figures (Marvin Jean-Pierre, 13 points) and shot 30.4 percent overall.

McPhee’s career night leads No. 11 Stanford past No. 8 Texas