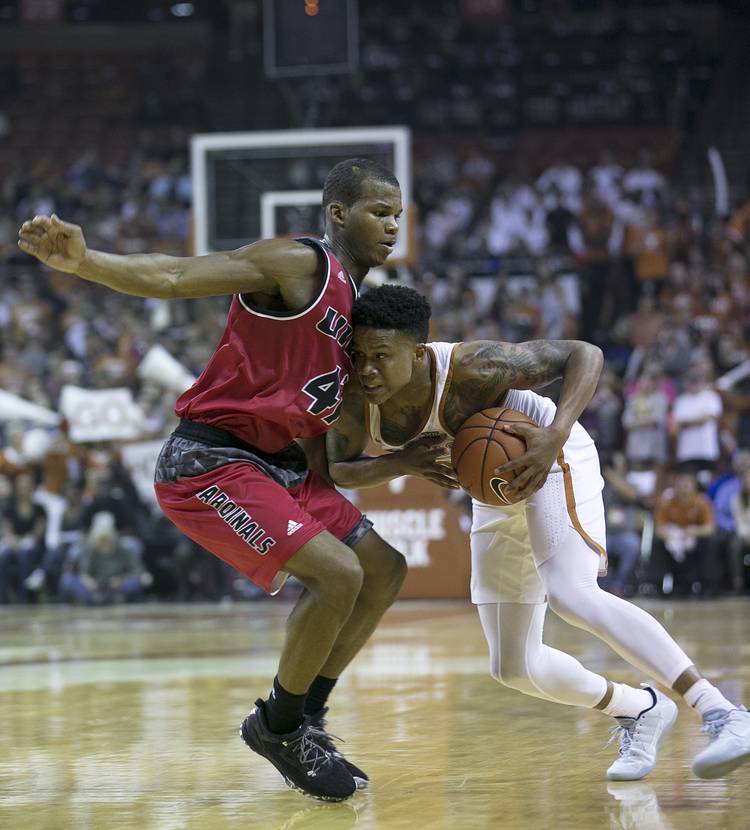 Texas's Jacob Young pushed back on Incarnate Word's Shawn Johnson during the first half of their game at the Erwin Center on Friday, November 11, 2016. DEBORAH CANNON / AMERICAN-STATESMAN

After surviving a scare from Incarnate Word on Friday, the Longhorns fell two spots in the Associated Press’ Top 25 poll, but moved up a spot in the USA Today Coaches Poll on Monday.

Texas enters Monday’s game against Louisiana Monroe ranked No. 23 in the nation in the AP  poll and No. 21 in the Coaches Poll.

The Longhorns avoided a home and season opening loss on Friday when a late burst led them to a 78-73 win over Incarnate Word. Texas was missing several players in that game and, like most of college basketball in November, dealt with foul trouble.

Duke remains No. 1 in both polls, while Kentucky (No. 2) and Villanova (No. 3) moved up spots in the AP poll following Kansas’ overtime loss to Indiana last week. Oregon, North Carolina, Indiana, Kansas, Virginia, Wisconsin and Arizona round out the top 10.

Along with Texas and Kansas,  West Virginia (19) and Iowa State (20) are in the poll representing the Big 12. Oklahoma received 11 votes.

Charlie Strong: Focusing on Kansas and a bowl, not job security or elections

WATCH: Longhorn players talk about upcoming game against Kansas: ‘You can not take them lightly’