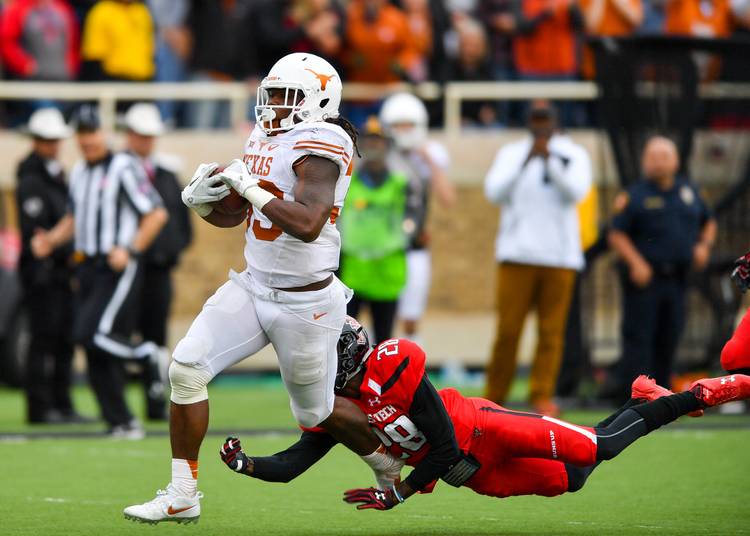 D'Onta Foreman (33) of the Texas Longhorns breaks the tackle of Paul Banks III (28) of the Texas Tech Red Raiders during the game on November 5, 2016 at AT&T Jones Stadium in Lubbock, Texas. Texas defeated Texas Tech 45-37. (Photo by John Weast/Getty Images)

The Heisman race is a popularity contest, to a degree. Players on middling teams have to break through the clutter to get attention.

Texas running back D’Onta Foreman has already gone over the toughest hurdle. He’s gained national attention for being one of the nation’s best runners despite the Longhorns’ 5-5 record and believes he should be among the Heisman finalists.

“I feel like I have the numbers to be there (in New York),” Foreman said after Tuesday’s practice. “I feel like even though we haven’t had the best season, I’ve been consistently productive, trying to help my team win.

“I feel like I’m just as good as those guys they have up there right now. I can’t shy away and say that I don’t feel like I am. And I definitely think I deserve to be there.”

On Saturday, Foreman has a chance to break the school record with his 12th consecutive 100-yard performance and maybe bolster his Heisman case against 1-9 Kansas. He’s currently tied with Earl Campbell for 11 straight triple-digit outings.

Foreman averages a FBS-high 179.2 yards per game. If the Horns can make a bowl game, Foreman could become the second 2,000-yard rusher in Texas football history.

Foreman said he watches a TV copy of the game tape and can’t help but hear what national commentators do or don’t say about him and the Longhorns.

“I’m excited for the people that do have me in the race and feel like I should be in there,” Foreman said. “For the people that don’t, that just adds to my fuel. I’m trying to make my way to New York, so I’m going to do everything I can to get there.”

Offensive coordinator Sterlin Gilbert said the primary goal each week is to win. But someone will no doubt keep tabs on Foreman’s statistical progress in the final two games of the regular season.

“He’d rather have the win than the numbers,” Gilbert said. “The thing about it is we’ve been fortunate enough that, he’s been a huge part of what we do. He fits our scheme and he’s able to execute and produce on Saturdays.”