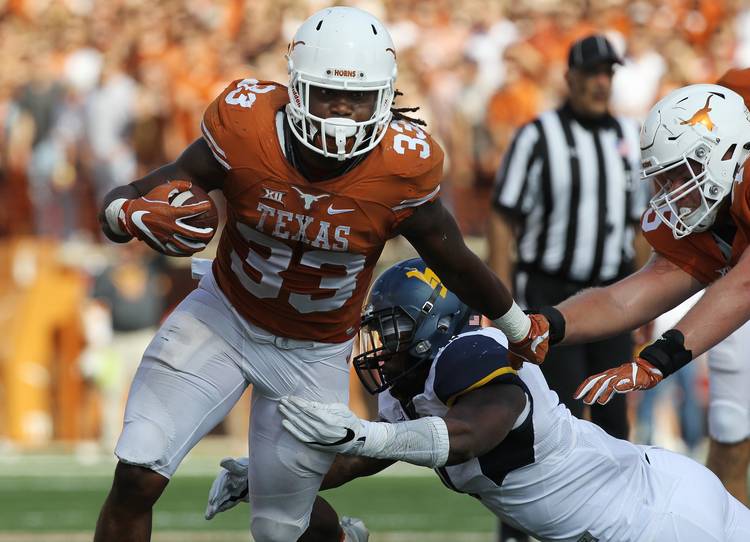 The Heisman Trophy is Lamar Jackson’s to lose.

With two weeks left in the regular season, it seems the national media has all but handed the Louisville quarterback college football’s top individual award. But who’s No. 2?

Earlier this week, Fox Sports reporter Bruce Feldman placed Texas running back D’Onta Foreman in that spot. He expounded on that decision during his podcast with fellow Fox analyst Stewart Mandel.

Here’s what Feldman said about Foreman on “The Audible”:

He had 170 rushing, 30 receiving (against West Virginia). You could ding him for the fumble, but remember this is a guy who plays on a team that’s the youngest team in college football and starts a true freshman quarterback. He’s averaging over 180 yards on the ground against ranked opponents. They’ve played a bunch of them.

He deserves to go to New York. I’m not saying I would put him over Lamar Jackson — that’s why I think Lamar Jackson’s comfortably at No. 1 — but to me he’s got as good a case as anybody.

Feldman was one of the first in the national media to give Foreman legitimate Heisman publicity.  Feldman first placed the Longhorns star in his weekly “Heisman Top 5” after Week 9 — when Foreman ran for 250 yards and 2 touchdowns against Baylor. Feldman has also watched Foreman play in person each of the past two weeks while reporting from the sidelines for Fox Sports 1.

Unlike the AP Top 25 poll and the coaches poll, these Heisman media rankings do matter. The task of choosing the Heisman Trophy falls to 870 media members spread throughout the country, plus the 58 living Heisman winners and one fan vote determined by an online poll.

Mandel, Feldman’s Fox Sports partner, doesn’t even have Foreman in his top five. However, the vast majority of the media votes go to local beat writers and other media members focused on covering a specific team or conference.

Foreman is building quite the Heisman resume. He leads the nation in rushing yards per game (179.2), is second in total rushing yards (1,613) and just tied a school record of 11-straight 100-yard rushing games held for nearly 40 years by living legend Earl Campbell.

But will it be enough to get him to New York? Only time will tell.

McPhee’s career night leads No. 11 Stanford past No. 8 Texas