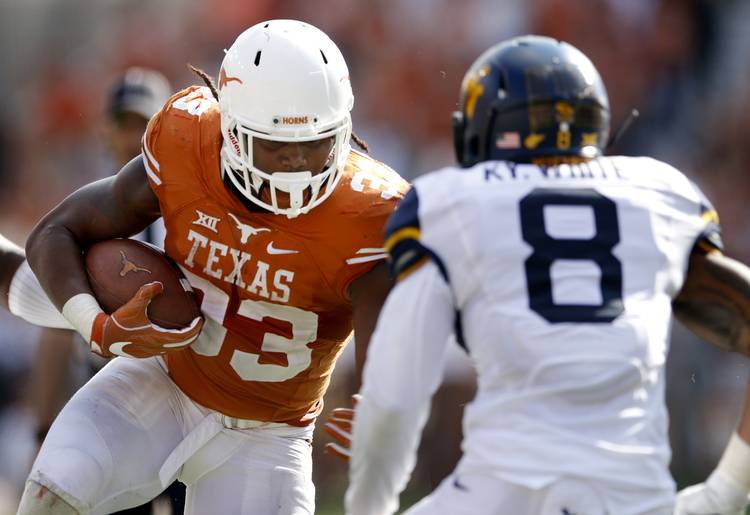 Texas running back D’Onta Foreman is having a historic season, one that has him receiving consideration for the Heisman Trophy.

Lurking at the end is an opportunity for Foreman to cash in on that success by declaring for the 2017 NFL Draft. Though only a junior, Foreman would be eligible for the draft and would likely be a prized prospect by many pro teams.

RELATED COVERAGE: D’Onta Foreman on the Heisman: ‘I feel like I have the numbers’

So how high has Foreman climbed on those draft boards?

According to analysts at Sports Illustrated and CBS Sports, there are still several running backs with higher draft stock than the nation’s leader in rushing yards per game — but not many.

SI.com’s Chris Burke ranks Foreman sixth among running backs, with Cook, Fournette, McCaffrey, Freeman and Ohio State junior Curtis Samuel in front of him. (Note: Samuel, an H-Back, is considered the No. 7 wide receiver in the class by CBS.)

Of course, Foreman leads all of the players above him in most statistical categories. He’s currently first in rushing yards per game (179.2), second in total rushing yards (1,613) and tied for ninth in rushing touchdowns (13). He’s also fourth in rushing attempts (241).

In addition to being a candidate for the Heisman, Foreman is also one of the front-runners for the Doak Walker Award, given to college football’s top running back each year since 1990.

If this is in fact his final season at Texas, it will be a heck of a way to go out. Foreman has rushed for at least 100 yards in 11 straight games, tying Longhorns legend Earl Campbell’s record that was set in 1977.

Foreman is the first Texas running back to rush for 1,000 yards in a season since Jamaal Charles in 2007, and with two games remaining could conceivably become just the second player in school history to rush for 2,000 yards after Ricky Williams did so in 1998.

It says something about the current crop of college running backs that Foreman might not be one of the first five running backs drafted, should he choose to leave.