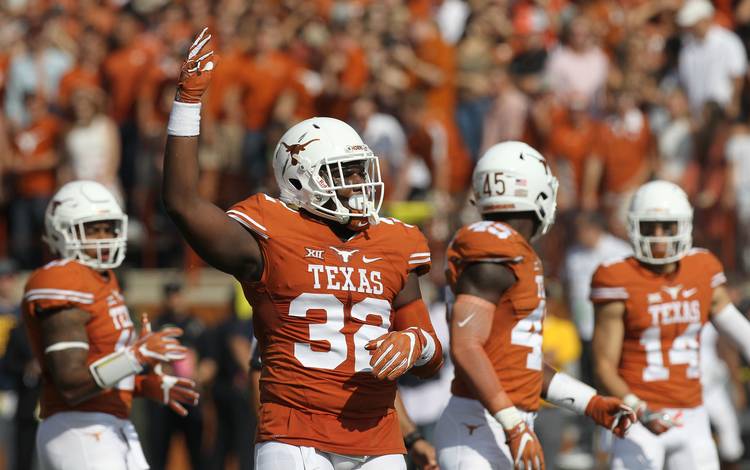 Texas defensive end Malcolm Roach is having one heck of a freshman season.

On Saturday, Roach moved into a tie for 10th in program history for sacks as a freshman when he recorded his third of the season against West Virginia. Listed at outside linebacker on the Longhorns roster, he has played mostly on the defensive line.

In the midst of defensive struggles and concerns about Texas coach Charlie Strong’s job security, Roach has been one of the most dependable players on that side of the ball all season long. And while he’s flown a bit under the radar, the record book isn’t the only one taking notice.

On Wednesday, Roach made analytics-based Pro Football Focus’ list of “Top 10 true freshmen in college football,” coming in at No. 8. Here’s what the website, which has Roach with a 79.2 rating for the season, had to say about one of Texas’ brightest young stars:

Roach posted his third sack of the season against West Virginia this past weekend, and now has 23 total pressures for the year. He posted four solo tackles, all of them for stops.

In addition to putting pressure on opposing quarterbacks, Roach has 28 total tackles (20 solo) and 6 tackles for loss — tied for third most on the team. Teammates have raved that, at 6-foot-2, 263 pounds, he could even play defensive tackle.

Yet he’s also shown the athleticism to make open field tackles, like this big hit he made against UTEP.

Roach was a standout at Madison Preparatory Academy in Baton Rouge, Louisiana, where he racked up incredible statistics — 143 tackles, 14.5 sacks, 26.5 tackles for loss, two interceptions, five pass breakups, 20 hurries and two blocked punts — last fall. The Longhorns swooped him up from under LSU’s nose, and they’re awfully glad they did.