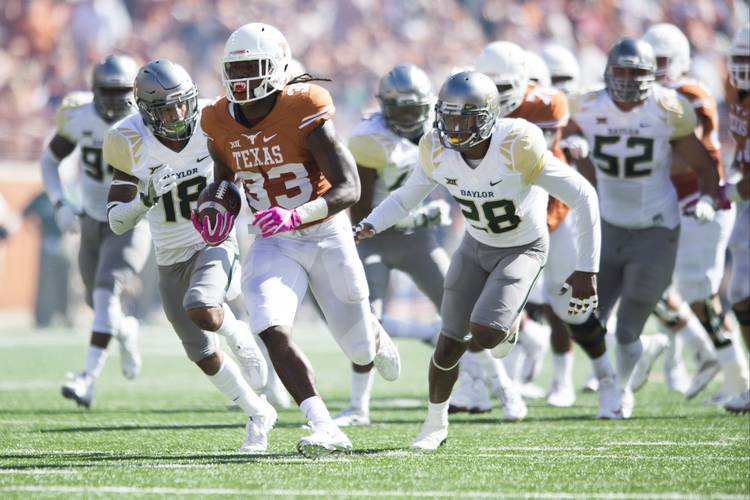 AUSTIN, TX - OCTOBER 29: D'Onta Foreman #33 of the Texas Longhorns breaks free for a 37 yard touchdown run against the Baylor Bears during the first half on October 29, 2016 at Darrell K Royal-Texas Memorial Stadium in Austin, Texas. (Photo by Cooper Neill/Getty Images)

One day after he was grouped among the nation’s best running backs, Texas junior D’Onta Foreman was placed with the top players in the country.

Foreman has been named a semifinalist for the 2016 Walter Camp Player of the Year award. Foreman is looking to become the fourth Longhorn to win this honor as Ricky Williams (1998) and Colt McCoy (2008, 2009) were previously recognized.

Foreman is one of 15 semifinalists for the Walter Camp Player of the Year award, and he joins Clemson quarterback Deshaun Watson, San Diego State running back Donnel Pumphrey and Louisville quarterback Lamar Jackson among the contenders. Oklahoma quarterback Baker Mayfield and his top target — receiver Dede Westbrook — are also on the list of semifinalists.

On Wednesday, Foreman also earned semifinalist status for the Doak Walker Award. He has run for 1,613 yards and 13 touchdowns this season, and no player is averaging more than his 179.2 yards per game. Foreman will attempt to record his 12th straight 100-yard performance in this weekend’s game at Kansas.

The field of 15 semifinalist for the Walter Camp Player of the Year award will be dwindled down to five finalists on Nov. 30, and the winner will be announced on Dec. 8. The recipient of the Doak Walker Award, which is given to the nation’s top running back, will be revealed on the same day.

Foreman is not the only Longhorn eyeing a major award this season. Punter Michael Dickson and offensive lineman Connor Williams have respectively been named semifinalists for the Ray Guy Award and the Outland Trophy.