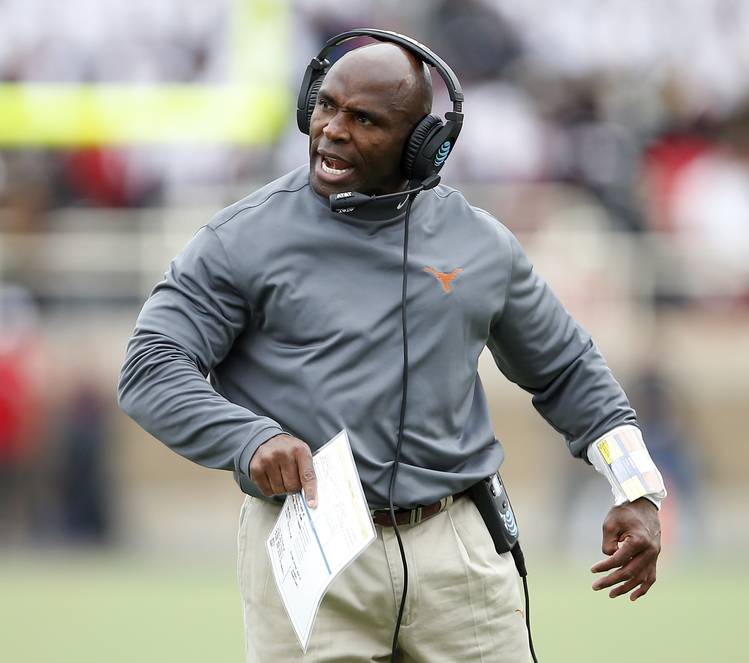 What is Texas going to do about Charlie Strong?

And what exactly is Shaka Smart doing in his role as the basketball coach at Texas?

First off, any anonymous reports stating “Charlie needs six wins” or “He needs seven” to remain the coach is just plain baloney at this point. There’s an entire body of work spanning three years that Texas President Gregory L. Fenves can look upon and make his decision.

At this point, Strong is still three games under .500 during his tenure. However, the overwhelming majority of the players on the two-deep roster will return next season. During a Friday afternoon production with ESPN announcers three weeks ago, Strong himself told ESPN announcers that “whoever is coaching this team” next season can win 10 games.

All that said, if any coach in his situation loses to 1-9 Kansas this weekend, forget it. It’s over.

As long as Texas beats Kansas and puts up a decent fight against TCU, Strong should be back in 2017, if what we’re being told is accurate.

Others have plenty to say about Strong.

Q. Ya know, I’ve been watching the back and forth of Strong, it seems we are okay with a .500 season so I say keep him. I tried to argue that he wasn’t the man for the job years ago but nobody wanted to hear it. So now that he’s 16-19, I say a .500 coach would be an improvement.

DAVIS: Based on the fan attendance and chatter after the West Virginia game, you have to admit there is a growing sense of either apathy or resignation out there among the fandom. That cannot be denied.

Q. It’s a tough decision. The defense is playing better for sure but if strong stays will he still coach it or will he hire another defensive coordinator that may or may not be another disaster. Also considerations as to questionable play calling by Sterlin Gilbert. Special teams coming apart in the past two years bothers me. Last year’s missed PAT for the Cal game and the mishandled snap on the punt for the OSU game.

Then this year he did not recruit a field goal kicker to speak of and it would even be worse if not for a graduate transfer. I can’t imagine why in three years he has not hired a special teams coach and if he had maybe three blocked extra-point attempts in one game would not have been an issue. The complexion of Saturdays game would have changed if not for a blocked field goal.

DAVIS: Why Strong appears to be dismissive of special teams is beyond my realm of comprehension. After the Oklahoma State debacle, he acted like all questions about the three blocked extra points were non-essential. “Oh, we’ll get that fixed,” he said several times. And yet, there was another kick blocked against West Virginia, something Strong blamed on kicker Trent Domingue. He could win a ton of political points by improving the special teams. It shows attention to detail. And for goodness sake, please start making the kick returners take a knee when they field the ball in the end zone. I’ve lost track of how many yards Texas has lost this season by starting from the 16-20-yard line instead of the 25 after touchbacks.

Q. Hey Greg Fenves, look at Louisville since they lost this fool. In a position to play for a national championship. Going to have a Heisman winner and have been winning. All since they hired a real coach. Open your eyes sir.

DAVIS: Louisville also has a quarterback who might win the Heisman. That’s kind of important.

Q. Give him 1 more. This team is gonna be nasty next year.

DAVIS: By offensive coordinator Sterlin Gilbert’s count, 37 of the 44 players on the two-deep roster will return. That’s noteworthy.

Q. Keep him. All day. He is a missed field goal and/or penalty from winning every game, plus a great gentlemen who reflects very well on the University. They should have extended his contract after Baylor to show some class.

DAVIS: Strong is an excellent representative of the university, no question. But the university generally doesn’t fire coaches or give out contract extensions during the season, either.

Q. Texas needs to keep Strong. As an “outsider” you can tell his team(s) have improved over the last two/three years even if the record doesn’t show it. Same story in Morgantown, there was a segment of the fanbase that wanted Holgorsen gone last year. Look what WVU would have missed out on this year if that had happened. Sometimes you have to have a little patience which seems to be in short supply too many times in current day college football.

DAVIS: I’ve taken to comparing the Longhorns’ situation with that of the Cowboys. Jerry Jones stuck with Jason Garrett after some brutal years, and now that patience is being rewarded. The Cowboys built up the roster through the draft (if you can believe that) and now appear to be the best team in the NFC. That’s not to compare the Horns to a NFL franchise. I’m simply saying that real success in a game this complicated does take time.

Q. Many fans and players — who think with their hearts instead of their brains — want Strong back. And I am sure other schools in the conference want him back, too, in a schadenfreudean way. He’s in his 3rd year with 16-19 thus far. So give him a 4th…? Isn’t insanity doing things the same way and expecting a different result? Any other Texas coach would be shown the door thus far. Fenves, bless his heart, wants to be seen as a magnanimous, equal-opportunity leader, no matter how much the programs sinks. No one wins, except Charlie Strong’s bank account.

DAVIS: Let’s assume that Fenves does want to make a change. Strong has two years remaining on a guaranteed contract worth approximately $10.7 million. That’s a lot of jack to pay a coach to leave. If he stays, Strong must receive some kid of extension. The school cannot have its coach trying to recruit with just two years left on his contract. Opposing coaches would pound into recruits’ heads, “Oh, he’s not going to be there your entire time.” Trust me, that negative recruiting pitch works. So he must get some kind of extension, but what would that look like? If I’m Fenves, I give Strong a two-year extension with a serious raise for the 2019 and 2020 seasons — but it’s not guaranteed. Maybe as much as $6 million or more for those two years. If Strong is still here to see those years, he’d be worth every penny.

Meanwhile, over at the Erwin Center, the men’s basketball season is off and running. Smart raised eyebrows with his comments about the election after last Friday’s season-opening win over Incarnate Word.

“When someone who is elected who has a history of being hateful, of being racist, of being sexist, of saying certain things that are derogatory toward a certain group, it feels like a slap in the face,” Smart told me after the press conference ended. “That’s how some of those guys felt. But you know what, we’re going to have to move forward. They’re not going to do another election. It is what it is and we have to respond the right way.”

Smart had issues with the American-Statesman and the Associated Press’ headlines on the story, indicating that he believed it was a “slap in the face.” On that point, he had a legitimate beef. Smart was clear to say that’s how the players felt, not necessarily him.

Either way, I applaud Smart for talking so openly and boldly about such a sensitive topic. This is a coach who focuses on the entire person, not just the athletic portion of 18- to 22-year-olds that can help him win basketball games.

As one might expect, there were mixed opinion about Smart saying anything at all.

Q. Shaka this is TEXAS and I suggest you not comment on controversial things if you want to KEEP your job. You might could do this if you were coaching at UCLA, OREGON, or somewhere else. But that kind of talk gets you unemployed in TEXAS.

Q. Wow, too bad you are buying into the garbage that the MSM were spewing about Trump and us deplorables. How about you try to find out the truth before you spew your racist BS there Shaka. You have lost my support. Good Luck.

Q. We got rid of Rick Barnes for this ?

Q. Take just five minutes, FIVE, to click the audio link in the story and listen to the end of Smart’s comments (in response to multiple questions from the press). This is a thoughtful, cerebral man who is in touch with the feelings of his players, and who knows the currents running through our country and history. If you actually listen to them, and you still want to run him out of town, then you need to walk in the shoes of people of color and women for a while, because you clearly have not.

Q. Love Coach Smart. He’s using his voice and power to speak out against hatred and racism. We need more like him. We will not let our country become divided again.

Q. I wonder how people would react if Coach Smart and Coach Pop expressed the opposing view of supporting Trump? My guess is that they would no longer be considered so intelligent and such free thinkers… and most likely out of a job.

Q. You are a great coach. Don’t ruin it by airing your far left political biases and inability to come to terms with the fact that as deplorable as Trump is, Hillary is far, far worse.

DAVIS: Smart isn’t likely to address this topic again, and as far as the administration is concerned, it’s a non-issue. The Longhorns have a long basketball season ahead.