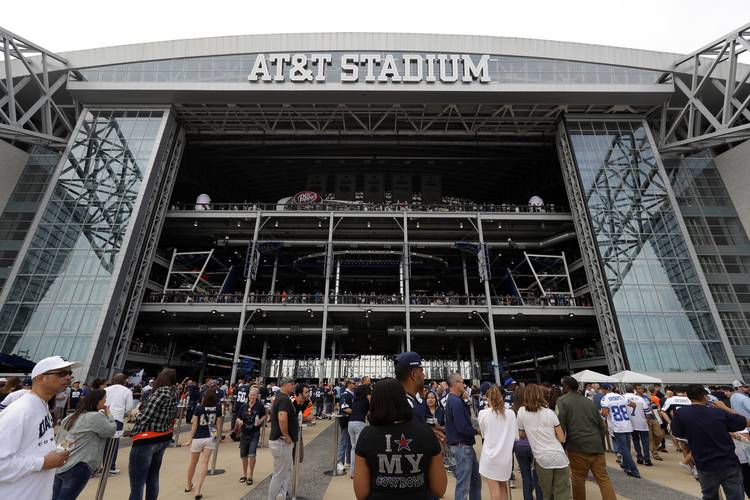 ARLINGTON, TX - OCTOBER 09: Fans enter the stadium prior to the game between the Dallas Cowboys and Cincinnati Bengals at AT&T Stadium on October 9, 2016 in Arlington, Texas. (Photo by Ronald Martinez/Getty Images)

When the Big 12 Conference football championship game returns next year, it will be anchored in AT&T Stadium in Arlington.

AT&T Stadium, home of the Dallas Cowboys, will host the game for five consecutive years from 2017-21.

The Big 12 voted to bring back the title game after a six-year absence. The last two Big 12 championship games were played at AT&T Stadium and decided by a total of four points — and Texas was a part of one of them.

Hunter Lawrence kicked a last-second field goal to give the second-ranked Longhorns a 13-12 win over No. 22 Nebraska in 2009.

However, the game ended in controversy because it was highly questionable with the clock ran out or not on a Colt McCoy throwaway pass. Texas was allowed to kick the field goal and went on to the national championship game, where it lost to Alabama.

The following season, No. 9 Oklahoma upended No. 13 Nebraska 23-20 behind two second-half field goals.

Now after a hiatus, the game returns but won’t move around any time soon.

The Alamodome in San Antonio and Arrowhead Stadium in Kansas City were competing with Arlington, but it appears AT&T Stadium made a bid that blew the others away. Financial terms of the deal were not disclosed.

“The building is a state of the art facility and offers many amenities that will be enjoyed by our institutions and fans,” Big 12 commissioner Bob Bowlsby said in a statement.

AT&T Stadium opened in 2009 with a seating capacity of 80,000 that can be maximized to over 100,000 with standing room. Among its many features are a retractable roof, one of the world’s largest high definition video screens and a collection of contemporary art.

The Big 12 title games have been competitive and sometimes surprising. The previous 15 games featured five contests in which the higher-ranked team was upset and five that were decided by a touchdown-or-less.

At The Buzzer: Texas 85, Eastern Washington 52

If the quarterback thing doesn’t work for Colt McCoy, he may have this to fall back on