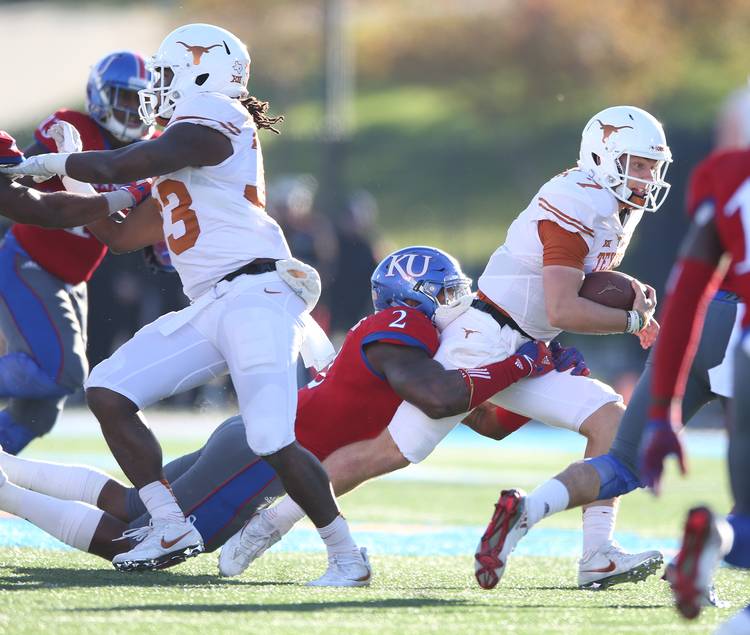 Texas's #7 Shane Buechele tries to get away from Kansas's #2 Dorance Armstrong during the first half in Lawrence, Kansas on Saturday, November 19, 2016. DEBORAH CANNON / AMERICAN-STATESMAN

Texas quarterback Shane Buechele returned to the field after suffering an injury during the second quarter against Kansas.

He was taken to the locker room for evaluation, but returned to the sideline and was seen warming up. Texas confirmed that Buechele had been diagnosed with a strained neck.

Texas says that QB Shane Buechele has been diagnosed with a strained neck. He is available to return. #HookEm

Buechele was down for several minutes after taking a hit after a short run. Tyrone Swoopes replaced him for one drive and lost a fumble that Kansas recovered.

Buechele is not getting up after that hit.

Buechele put his head in the chest of a tackler and didn't get the best of it. Tyrone Swoopes warming up on the sideline. #horns #hookem

Buechele is sitting on an equipment chest, holding his helmet, looking down. Appears to be answering trainers questions.

Texas QB Shane Buechele is going to the locker room with trainers.

This seems important… Buechele is back on the sideline with his helmet.