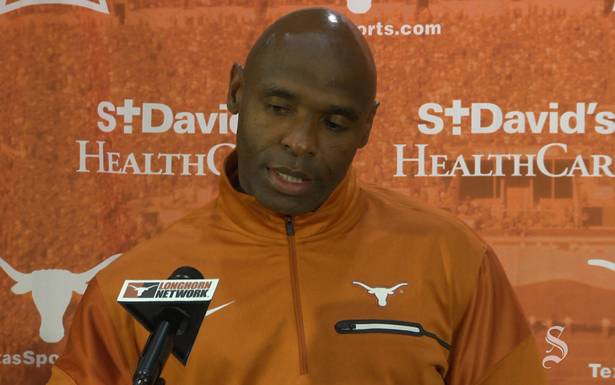 Texas coach Charlie Strong went a step further on Longhorn Network than he took with reporters on Monday and said flat-out, “We deserve to come back.”

On “Rewind with Charlie Strong,” the coach led off the broadcast by promoting himself and his program with host Lowell Galindo.

“I think about what we’re building here, and I think about the players that we’ve recruited in this program and their families, and I have a great coaching staff,” Strong said. “It’s not like you’re sitting here trying to promote your job, but you just feel like, hey, we put the work in, we’ve put a lot of work in, we deserve to come back.”

Strong was then asked about an ESPN report that was posted midday Saturday hours before Texas faced Kansas. The report said UT donors were applying “extreme pressure” on president Gregory L. Fenves to make a coaching change.

“I try to take their mind off it,” Strong said on LHN. “I don’t allow my mind to race down that road, because if anything’s going to happen, the people who’s in charge, who’s controlling that situation will tell me.

“So I tell them, don’t believe everything you read,” he added. “You can put any report out there. Anything can be said. Your focus, you should be locked in on this game. But when there’s so much chatter about it, it’s hard when guys are sitting there. They’re all on Twitter. So when their phone beeps, they’re all puling their phone out and reading what’s on it.”

Earlier in the day, Strong told reporters that a player approached him at the team hotel and said he needed to address the specific ESPN report with the team. “And I told them, ‘Guys, just don’t believe the rumors. I will tell you what’s happening. I’m going to be up front with you and you will know,’” Strong said during his Monday press conference.

The American-Statesman reported on Sunday that Fenves has decided to fire Strong sometime after Friday’s regular-season finale against TCU. Other media outlets, including ESPN, confirmed the report, and no UT administrator has denounced anyone’s reporting.

Late Sunday, Strong told ESPN analyst Kirk Herbstreit that no one at UT had told him anything about his job status.

However during the Monday press conference, Strong told reporters he speaks with Fenves after every game and that he had spoken with Men’s Athletic Director Mike Perrin the day after the Kansas loss.

Golden: Players’ love likely not enough to save Charlie Strong