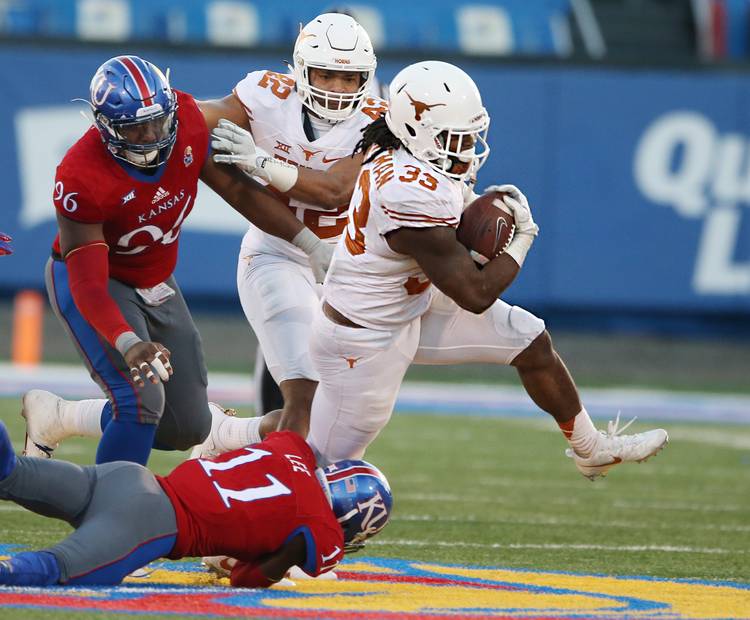 Texas's #33 D'Onte Foreman carries the ball during the second half in Lawrence, Kansas on Saturday, November 19, 2016. DEBORAH CANNON / AMERICAN-STATESMAN

Texas running back D’Onta Foreman may not have taken full advantage of his opportunity last weekend.

When it comes to the race for the Heisman Trophy, Louisville quarterback Lamar Jackson is still way ahead.

A pair of fumbles in the Longhorns’ 24-21 overtime loss to Kansas took away some of the luster from his 51-carry, 250-yard performance on Saturday in Lawrence, Kansas. It’s unlikely Foreman would have unseated Jackson anyway, but this past weekend provided an opportunity to gain ground after Jackson’s stinker Thursday night at Houston.

Despite being sacked 11 times and completing less than 50 percent of his passes in a 36-10 loss, Jackson is still the leader in pretty much every Heisman poll one can find. His season has just been that good.

Foreman’s has been special too, and the voters have taken notice — even if they don’t have him first. ESPN’s “Heisman Watch” poll is a prime example.

Three weeks ago, the Texas running back was nowhere to be found. Then he was seventh; then sixth. This week, Foreman is all the way up to fourth in the poll of ESPN experts, behind Jackson, Oklahoma wide receiver Dede Westbrook and Clemson quarterback Deshaun Watson.

Fox Sports reporter Bruce Feldman has been saying it for weeks, but now there seems a real possibility Foreman could end up in New York as a finalist. Feldman dropped Foreman from second to fourth, but still said he has “earned a ticket to NYC.” His Fox colleague Stewart Feldman left Foreman out of his top five for the second week in a row.

Elsewhere, Foreman continues to lead the Heisman fan poll with 23 percent of the vote and was named a finalist for the Doak Walker Award — given to the nation’s best running back.

It makes one wonder where Foreman would be if his team wasn’t 5-6. He’s now the nation’s leader in rushing yards (1,863) and rushing yards per game (186.3). On Saturday, he broke Texas legend Earl Campbell’s school record for consecutive 100-yard rushing games, and passed Jamaal Charles, Campbell and Cedric Benson on the single-season rushing yards list.

Foreman has now rushed for the third-most yards by a Texas player, and trails Ricky Williams’ record — set in 1998 — by 261 yards. Even if he decides to enter the NFL Draft, Foreman’s 2016 season will be remembered for years to come.

Did James Banks deserve ejection he received during Texas’ loss to Northwestern?