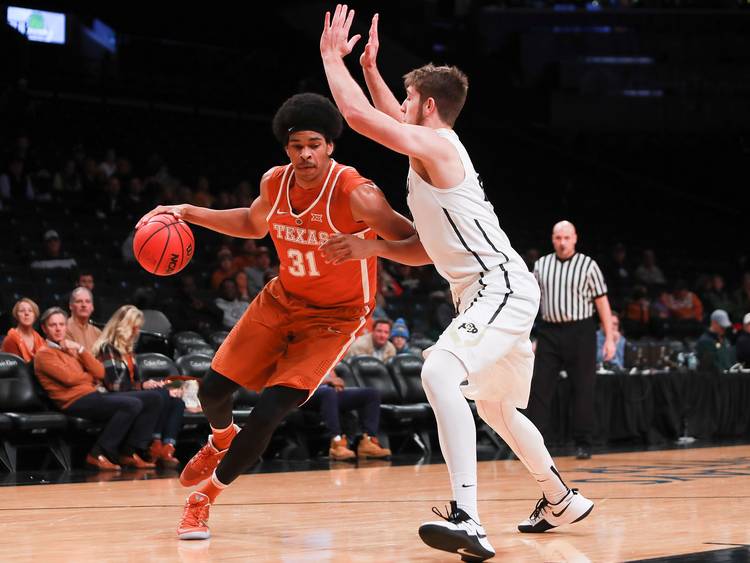 Texas' Jarrett Allen (31) drives to the basket on Lucas Siewert (25) of the Colorado Buffaloes in the first half of the consolation game of the Legends Classic at Barclays Center on Nov. 22, 2016 in Brooklyn. CREDIT: Michael Reaves/Getty Images

Colorado had to rebound from its first loss of the season and the Buffaloes did by rebounding.
George King had 12 points and 13 rebounds to lead Colorado to a 68-54 victory over No. 22 Texas on Tuesday in the third-place game of the Legends Classic at Barclays Center.
King, who matched his career high for rebounds which he set on Monday, led the big rebounding game for the Buffaloes (4-1), who finished with a 41-32 advantage on the boards including 17-12 on the offensive glass. Colorado scored 18 second-chance points.
“Huge,” Colorado coach Tad Boyle said of his team’s rebounding. “That’s really where you find out where the toughness comes from. That’s the stat that just shows up. Every game that we have you’re either plus or you’re minus. Last night Notre Dame outrebounded us. Today we outrebounded Texas by nine and that’s a big number. We want plus eight, that’s our goal and we hit it.”
And it was King who led the charge to the boards.
“George, the second half last night and tonight, he played (like) the light bulb was maybe coming on for him,” Boyle said. “He was terrific on the boards but I thought our whole team was.”
Derrick White had 16 points for Colorado, which lost 89-83 to Notre Dame in the semifinals, while Josh Fortune had 11.
“We needed that one,” Boyle said. “It’s crazy to think in November you feel it’s a must win but that’s how I felt approaching this game today for our team in terms of what it meant for down the road. You come to a place like this, you don’t want to go home 0-2.”
Kerwin Roach Jr. led Texas (3-2) with 16 points and Jarrett Allen had 15.
Colorado, despite giving up size on the inside, used offensive rebounding to take a 33-24 halftime lead. Led by King, a 6-foot-6 junior, the Buffaloes were up 16-2 at one point on the offensive glass and Texas had no answer.
The Longhorns, who lost to Northwestern 77-58 in the semifinals, used full court pressure to force turnovers and they were within 54-51 with 5:12 left on two free throws by Allen.
But Colorado went on an 11-2 run that was capped by — what else? — an offensive rebound by Wesley Gordon to match their biggest lead to that points.
King said he’s concentrating on rebounding.
“Absolutely. I’m long, athletic,” he said. “Why not use it because I’m not going to have it forever.”
Texas was 3 for 17 from 3-point range while the Buffaloes made 6 of 14 from beyond the arc.
“I think for our guys, you never want to lose and you never feel good about losing,” Texas coach Shaka Smart said. “They’re certainly down. I think anyone in our program is disappointed but I’ll tell you what if you can’t have a clear mind for what goes into what we need to do next, then you’re in the wrong locker room. I think this has gotten our guys attention from the standpoint of some of the things we preach as coaches all the time, which is you have to have a level of humility in your preparation to understand what you have to do to take away what other teams are trying to do.
“Sometimes experience is the best teacher and unfortunately these two games we experienced here in New York, they’re tough pills to swallow. But if we can learn a lesson from them they can help us as we move forward.”