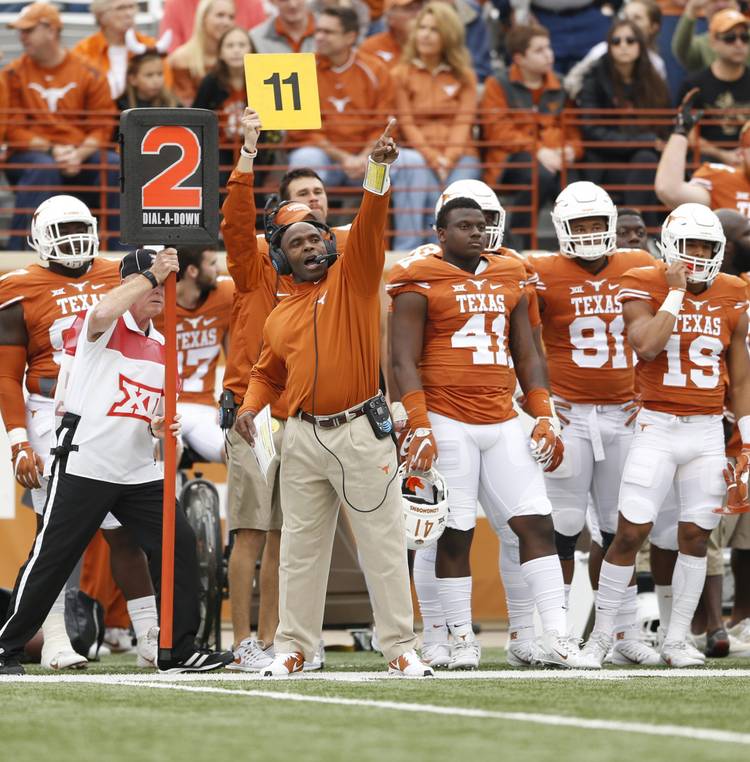 Charlie Strong on the sidelines during the last game of the season against TCU at Royal-Memorial Stadium on Friday November 25, 2016. JAY JANNER / AMERICAN-STATESMAN

Not exactly a barn burner here at DKR but the Horns have a chance to knock off TCU.

The Frogs lead 7-6 at the half in a game that’s about as exciting as the score suggests. The stadium is a long way from full on a Thanksgiving weekend that reeks of a Lawrence, Kan. hangover.

As reports swirl in Austin and nationwide about Charlie Strong’s future, there is a little matter of a football game against TCU with a bowl bid on the line.

While the defense is playing inspired ball, the offense is picking up where it left off in Kansas: lots of good stuff from D’Onta but not a to show for it.

A few thoughts from the first half:

The Horns will continue to pound D’Onta Foreman in the second half and get to 6-6 with a win. As for Strong, who knows? Houston losing at Memphis didn’t help Tom Herman’s cause in Austin or Baton Rouge, for that matter.

LOOK: Tim Cole’s father makes it back to DKR for Senior Day

At the half: Listless TCU leads listless Texas, 7-6