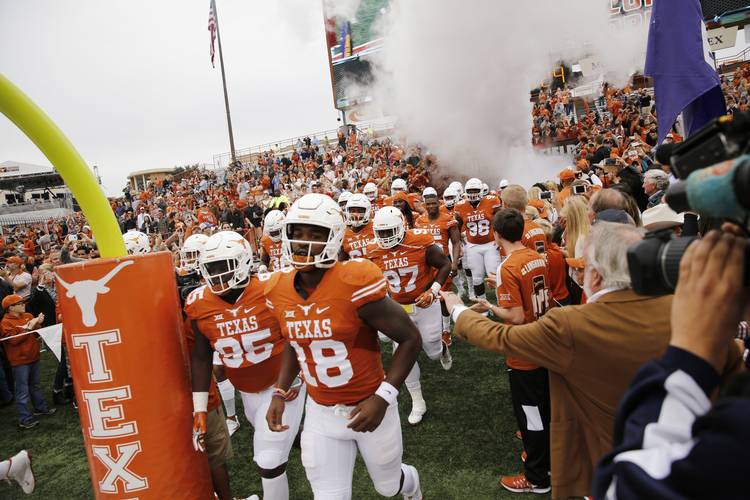 The Longhorns take the field at the start of the last game of the season again TCU, November 25, 2016 at Royal-Memorial Stadium. James GRegg/AMERICAN-STATESMAN

Could Texas find its sea legs in an ocean of mediocrity?

The Longhorns did not qualify for a bowl berth due to their 5-7 regular-season finish. However, it may be a struggle for 80 teams to reach the magic six-win total to fill the NCAA-approved 40 bowl slots.

If bowl organizers cannot find 80 eligible teams, the NCAA allows bowls to place teams based on Academic Progress Rates. Going into this weekend’s game, the Longhorns ranked 11th on the list with an APR of 971.

USA Today was tracking all of the scenarios, and noted that UT-San Antonio’s win over Charlotte on Saturday made the Roadrunners the 74th team to qualify. Four other teams could still reach six wins, and if all four did, Texas would have moved up to only fourth on the APR list.

Various Texas officials at multiple levels told the American-Statesman that school officials have not discussed what the Longhorns would do if invited to a bowl. “Good question for tomorrow,” one official said.

New coach Tom Herman will be formally introduced at a press conference on Sunday.

On a practical level, getting to a bowl game may prove chaotic. Most new coaches want to start interviewing assistant coaches and starting putting together new staffs. Herman will also want to have a much time recruiting as possible before the NCAA-mandated dead period begins on Dec. 12. Coaches can begin actively contacting prospects again on Jan. 11, 2017.

Herman will have the option but is not required to keep any of former coach Charlie Strong’s assistant coaches.

The major positive of getting into a bowl game is the Longhorns would have 15 extra practices in addition to another game.

Texas has not played in a bowl game since the 2014 season.

Bohls: Alabama ol’ reliable; OU has work to do