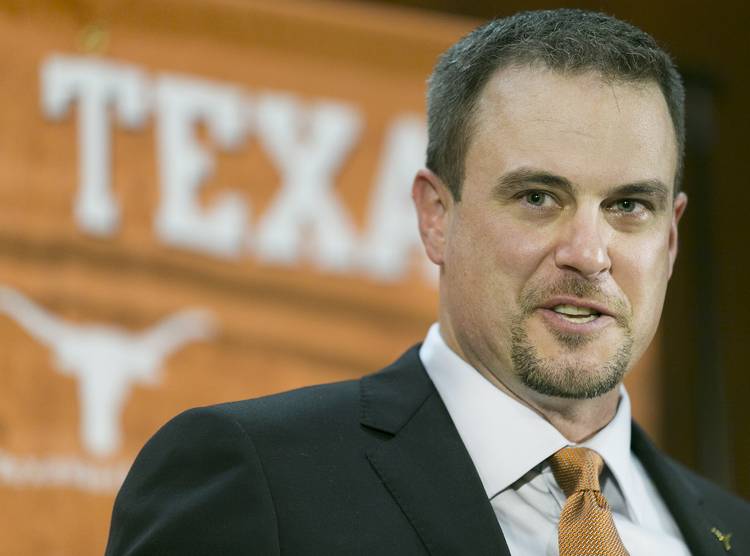 New Texas coach Tom Herman started his introductory press conference by thanking the University of Houston for the opportunity he’s had the last two seasons.

But the one-time UT grad assistant is ready for the new stage.

Texas athletic director Mike Perrin said Herman was the “real deal and the right choice and the clear choice for the University of Texas.”

Fenves spoke highly of former coach Charlie Strong and said during his assessment it was clear Herman was the school’s top target. Fenves, Perrin and Herman all met late Friday and the deal was finalized Saturday morning.

“Out of respect for those involved, we will not share further details about the search,” Fenves said, “but what is important is that in the end, we got our man.”

Former athletic director DeLoss Dodds and coach Mack Brown were on hand. Other UT coaches, staffers, fundraisers and employees trickled in as well.

“The first press conference is the best one,” Brown joked with reporters.

Herman’s first 30 minutes — publicly, anyway, addressing media and fans — as Texas’ coach was a masterful display of working the room. He’s either the real deal or so polished after watching Mack Brown and Urban Meyer do their things that he comes off as the real deal. And he showed particular flair with what politicians call “the 10-word answer,” delivering time and again:

When asked about any undue pressure, coming off Charlie Strong’s late-season comment that whoever’s coaching here in 2017 should win at least 10 games, and that this group of players will win a national championship before they’re through, Herman’s answer was simply, “No.”

When asked if he’ll have to make adjustments coaching at Texas, he answered, “None.”

When asked what he did to impress Brown back in 1999, when Brown hired him as a graduate assistant, he answered, “I don’t know I impressed him at all at that time.”

When he was asked whether Major Applewhite would be returning, he deftly answered, “I’ve been here six hours. The most important thing right now are the players in that locker room and to get on the road recruiting.”

When he was asked a second time about the pressures of coaching UT, he gave us, “I think pressure is that uneasy feeling you feel when you’re unprepared. Pressure is self-doubt.”

When asked if he’d ever dreamed that he’d be UT’s coach back when he was on Mack’s staff, he said, “I don’t know if my dreams ever got that big.”

In those 30 minutes, Herman said all the right things. He hit all the high points. He first thanked UT athletic director Mike Perrin for his kind words, then UT President Gregory L. Fenves for the “wonderful opportunity.” He then thanked Houston. He talked about how Texas “holds a seat among college football elite,” and how “we will build champions and will build men of character, and will do it all with integrity and class.” He let all former UT players know that the door is always open. And he reached out — several times — to Texas high school coaches, recalling the names of head coaches and junior varsity coaches that he dealt with very early in his career.

It was the stuff that burnt orange diehards surely soaked up. If you’ve spent the past three years frustrated over the program’s lack of consistency, Tom Herman is probably right up your alley.

On the pressure to win 10 games in 2017: “There’s never going to be any greater expectations from anybody outside our program. The biggest expectation we’ll always have will be within.”

On whether he’s spoken to D’Onta Foreman about his future: “D’Onta and I haven’t had the chance to talk, but I’m planning on doing so very shortly, hopefully by tomorrow morning, and figure out what his intentions are.”

On what his message will be to recruits: “The sales pitch will be there is talent here, they’re going to be playing with some talented players, and we’ll be the best trained team in America. We will be the most physically and mentally tough team on the field. Not once have I ever seen a football coach hold a championship trophy, whether it’s the Super Bowl or college or high school or whatever, say ‘We out-finessed them.’ That’s never come out of a coach’s mouth. Ever. And you’ll get one of the best educations and and living in one of the best cities in the country.”

On whether he’ll have to soothe pro-Charlie Strong feelings in the locker room: “I led off the (team) meeting with that, that a lot of you are very close to Charlie, and you should be. He’s a heck of a man and a heck of a football coach. But a also told them the definition of insanity is repeatedly performing the same act expecting different results, and we need to change some things. But that’s certainly not to take away from their emotions for coach Strong.”

Herman was asked what he’s specifically taken away the former coaches he’s worked with.

From Mack Brown: “I credit coach Brown the most for his inclusivity; he included high school coaches, former players, so many people in that great program that prior to him getting there probably were not included. And he had an unbelievable way of leading and managing people.”

From David Bailiff: “Love your players. Make sure they feel that love. In our program, you spell love T-I-M-E. You can’t just say it. Do it.”

From Paul Rhoads: “How to be passionate about a place you work for. He was an Iowa native who had the opportunity to coach in his own home state.”

From Urban Meyer: “I felt I went to head coaching school for three years. There were a thousand things I took away from coach Meyer, but probably the biggest one was the practice of alignment … The NCAA says we only get them for four hours a day during the season, and two hours a day in the offseason. Every message that’s thrust upon them, from signs on the wall to interaction with an academic counselor, the management and expectations of the program have to be aligned. … It can’t be OK to show up two minutes late to a tutor, but not OK to show up two minutes late to a position meeting. Kids have a way of going off the reservation a little bit.”