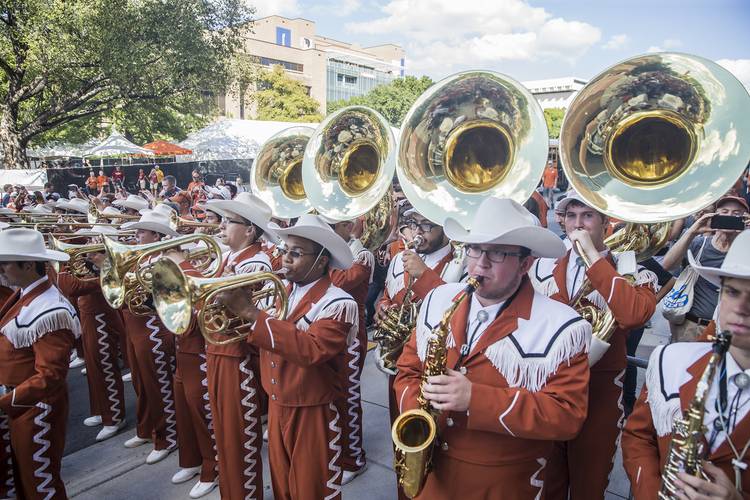 By now, you’ve probably seen the viral video of Fox Sports reporter Bruce Feldman nearly getting trampled by the University of Texas Marching Band prior to last Friday’s game against TCU.

It happened during Fox’s preview show as Feldman was talking about — at the time — potential coaching candidates at LSU and Texas. Unfortunately for Feldman, his live shot happened to coincide with the band’s pregame show, and the two came very close to literally colliding.

Feldman gave his account of events on his weekly podcast with fellow Fox analyst Stewart Mandell. You can listen starting at about the 47:30 mark, or read the transcription below.

“I saw in the Awful Announcing story that it was like, ‘Well, he should know better than just to stand wherever he wants.’ Well, that’s not how it works. You don’t just go, ‘Hey, I’m a sideline reporter so I’m going to stand in the middle of the field.’ Basically, wherever the camera people say has the ideal lighting is where you do it.

“I was far down, I think I was at the 10 or the 15 (yard line). The Texas band is so big and there are so many people. I wasn’t actually in the middle of the field, I was just a step on from the sideline. … Obviously, I hear the band playing throughout. But they’re going through their march, and all of a sudden I can feel people walking — literally up to where they’re stepping on my right foot.

“I’m like, ‘OK, listen. Just focus into the camera what you’re saying, try as best as you can to listen to what Rob (Stone’s) question is.’ I thought this: ‘I am definitely ending up on Deadspin and Awful Announcing.'”