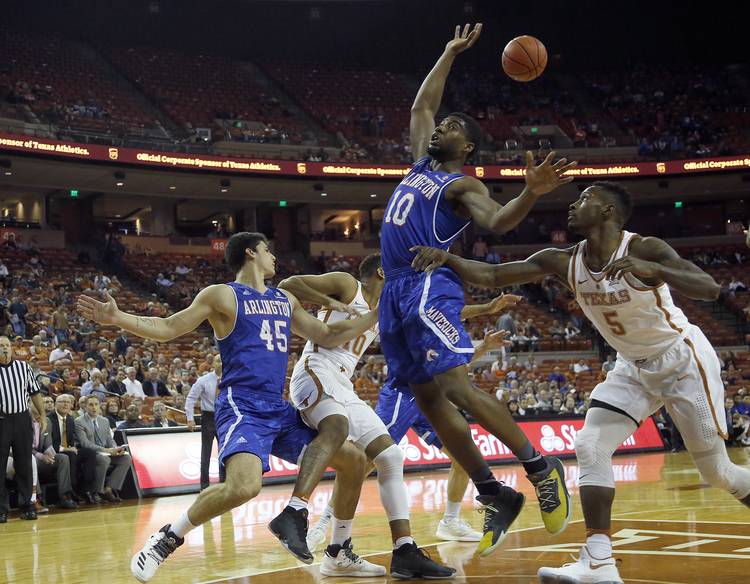 Jalen Jones #10 of the Texas-Arlington Mavericks reaches for a loose ball as Kendal Yancy #5 of the Texas Longhorns defendes at the Frank Erwin Center on November 29, 2016 in Austin, Texas. (Photo by Chris Covatta/Getty Images)

Last season, UT-Arlington came to Austin and pushed Texas into overtime. This year, the Mavericks left no doubt.

A system school that was 0-11 all-time against the mighty flagship on the hardwood, UTA crushed Texas 72-61 on Tuesday at the Erwin Center.

The Longhorns, which fell out of the Associated Press Top 25 poll this week, fell behind by 16 points but got back to 10 with 1:33 left. But in a wild sequence, Kerwin Roach Jr. tried to save a ball from going out of bounds. He threw it straight to UTA’s Kaelon Wilson, who went and threw down a monster dunk with 1:20 remaining.

Four UTA players finished in double figures as UTA shot 46.6 percent overall for the game despite an awful start. For Texas, Tevin Mack scored a team-high 19 points on 8 of 14 shooting. Roach scored 16, and Jarrett Allen added 13 more but the Longhorns fell to 5-3 on the season.

Prior to the game, Texas had won every matchup dating back to November 1989. In fact, the average margin of victory was 21.8 points.

It was ugly early. UTA missed its first 11 3-pointers but finally broke that string with 2:47 left in the first half when Erick Neal connected from the top of the key. That made it a four-point game.

Kevin Hervey’s two free throws and Wilson’s runout tied things up. Hervey drained a 3-pointer with 15 seconds before half, giving UTA a 30-27 lead and the hundred-plus Mavs fans in the upper deck were shouting “U-T-A!”

The Mavs shot 60 percent in the second half while the Horns struggled to do the basics, committing nine turnovers in the second half alone. After the final horn, Texas coach Shaka Smart grabbed UTA’s Scott Cross by the arm and the two spoke for longer than normal before the two teams shook hands.

UTA guard Drew Charles gave the Mavs a massive shot of adrenaline with back-to-back 3-pointers with 6:45 left in the second half. The first was a fadeaway off a screen. The second was nothing but net as UTA took a 59-43 lead. At that point, the 16 points was UTA’s biggest lead of the night.

Charles hits his 4th 3, and @craigway1 with the the perfect call: "Guard him fellas, he's number 4 in the blue!"

On Tuesday, Texas coach Shaka Smart indicated that sophomore Eric Davis Jr. may be putting too much pressure on himself. That continued to manifest itself against the Mavericks. Davis was 0 for 8 shooting, six of those from 3-point range and had just two rebounds in 20 minutes. That’s simply unacceptable from a player who admitted he wanted to be an alpha dog during the preseason.

Hervey was a possible NBA prospect last season until he suffered a season-ending knee injury in January. He’s not back to full strength, as evidenced by his uneven performances so far this season. But he piled up 18 points against Texas and had some strong moments. He picked Kerwin Roach Jr.’s pocket in the open floor at one point. Hervey posted up and scored with easy on Jarrett Allen. It was a solid, all-around night.

The first 10 minutes had to be difficult to watch on Longhorn Network. It was even worse in person. UTA started the game 0 for 10 from 3-point range and Texas was 1 for 7. The Mavericks finally broke into double digits with Jalen Jones’ driving layup with 7:24 remaining in the first half. Texas still had a 17-10 lead at that point.

Friday’s game against Alabama is the best non-conference home game left on this season’s schedule. Coach Avery Johnson’s club was 3-2 going into Tuesday’s game against Charleston Southern. Texas will play at Michigan next Tuesday and face Arkansas on Dec. 17 at the Toyota Center in Houston.