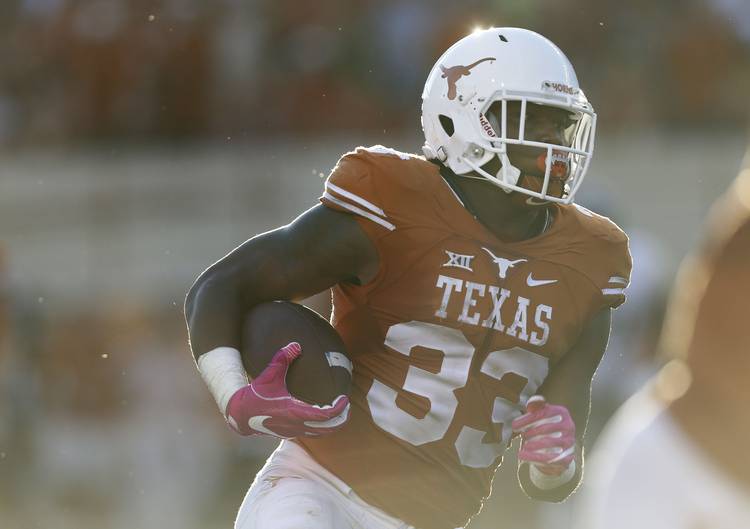 Texas running back D’Onta Foreman won’t have any more opportunities to pad his stats in 2016, not that they need any padding.

At regular season’s end, Foreman remained the NCAA’s leading rusher with 2,028 yards and has a healthy lead in rushing yards per game (184.4). He rushed for at least 100 yards in each of his 11 appearances, running his streak to a Texas-record 13 games.

So, where does that leave him in the race for the Heisman Trophy?

It depends whom you ask, but most of the national media pundits seem to believe Foreman will be invited to New York for the ceremony. None is giving him a legitimate chance to take home the trophy, due in large part to the Longhorns’ 5-7 record.

Even after Louisville dropped its second-straight game to close out the regular season, Cardinals quarterback Lamar Jackson’s resume is too good to top. A season with 4,928 total yards and 51 total touchdowns will do that.

Take a look at ESPN’s “Heisman Watch.” Jackson took nine of 10 first-place votes, with the other going to Clemson quarterback Deshaun Watson. Foreman sits fifth, one spot behind where he was last week.

Meanwhile, Fox Sports’ Bruce Feldman and Stewart Mandel remain split on the Texas star. Feldman, who covered Texas for much of the season as a sideline reporter — and trumpet dodger — for Fox broadcasts, has Foreman third behind Jackson and Washington quarterback Jake Browning.

Great stat on the #Texas star.. also D'Onta Foreman has rushed for over 400 yds more than any other Power 5 RB this year. https://t.co/9Hb2EEVwUC

Mandel left Foreman out of his top five completely, and he’s not the only one. Analysts at Sports Illustrated and USA Today also have him on the outside looking in. Remember, the Heisman is voted on by the 58 living trophy winners, 870 media members spread throughout the country and one fan vote determined by an online poll.

For what it’s worth, Foreman is still rocking the fan vote.