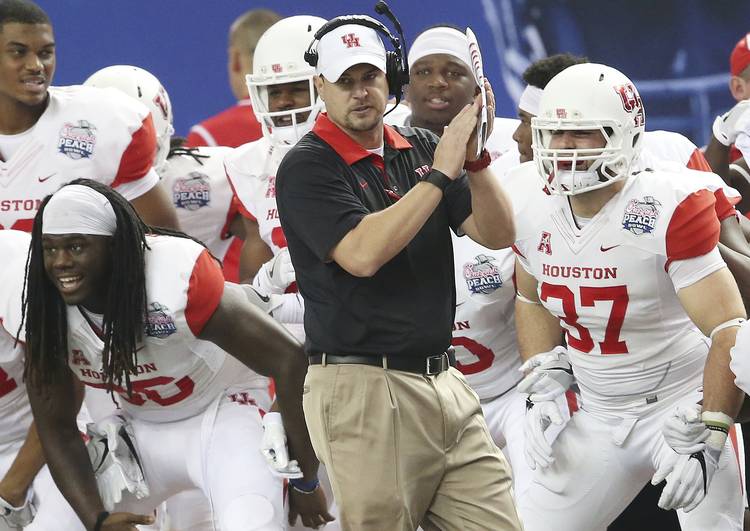 Houston head coach Tom Herman watches play against Florida State during the first half of the Peach Bowl NCAA college football game in Atlanta. A person with direct knowledge of the discussions says Herman has told the school he is leaving to become the next coach of the Texas Longhorns. Herman would replace Charlie Strong, who was fired Saturday, Nov. 26, 2016, after three consecutive losing seasons at Texas. The person confirmed Herman's move to Texas on condition of anonymity because neither school had yet publicly announced the decision. (AP Photo/John Bazemore, File)

The chairman of the University of Houston Board of Regents ripped the University of Texas on Tuesday for hiring away the Cougars’ football coach and for UT’s role in the Big 12’s decision to spurn Houston and other potential expansion partners.

“It’s unfortunate the way that it all happened in the end. It happened so quick,” UH regents chairman Tillman Fertitta said of coach Tom Herman’s departure on the “Michael Berry Show” on Houston’s KTRH-AM radio. “It’s disappointing that the University of Texas, who wants to open a campus in Houston and says they would never do anything to harm the University of Houston — with all the football coaches in America  — who said that they would stand up for us to get into the Big 12 and then didn’t even vote for us … had to come take our little football coach. But that’s business and it’s a great opportunity for Tom and I wish him the best. I hope they all do well, but I just hope we do better.”

Fertitta went on to call the Big 12’s aborted expansion process a “sham” after leading Houston and other suitors through months of scrutiny and speculation but ultimately voting to remain a 10-team conference.

“For Texas, who says, boy, we’re all excited this summer and we’re going to vote for y’all and they don’t even vote for us, explain that one to me,” he said. “It was one of the great shams in college football and college athletics and just college period. … It was a total sham, and I sit here today and I laugh at the Big 12 and their leadership.”