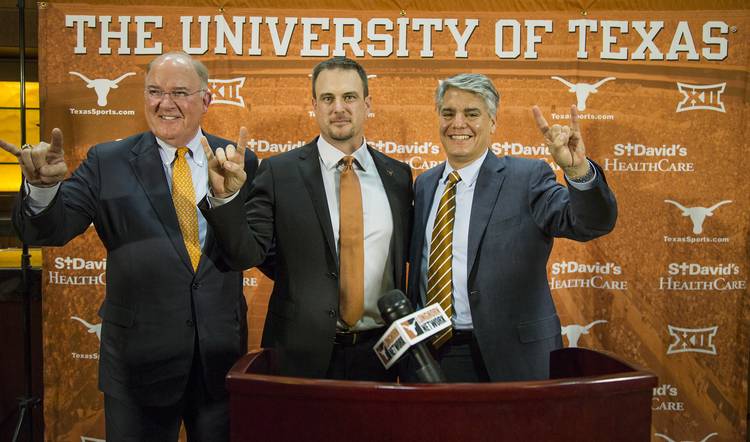 New Texas coach Tom Herman joined “The Dan Patrick Show” on Tuesday, and the host grilled him pretty hard on the timeline of events that ended with him in Austin.

Dan Patrick pressed Herman on whether or not he was being truthful in an ESPN interview prior to Houston’s game with Memphis on Friday, and when he ultimately accepted the job offered to him by University of Texas President Greg Fenves and Athletic Director Mike Perrin.

You can watch clips of the interview below, or read excerpts from the conversation.

On timeline of interview/accepting the job:

Patrick: When did you agree to the Texas job?

Herman: Oh boy. Like 4 in the morning on Saturday morning.

Patrick: Why 4 in the morning?

Herman: If the timeline is that important, we can. … I got a phone call when we landed from the Memphis game that said some people from Texas wanted to meet with me. The meeting didn’t start until about 10:30 at night and went that long to figure something out.

On Friday interview with ESPN prior to Houston’s game against Memphis, when Herman said, “Honestly, don’t believe anything that you read.”

Patrick: Were you being sincere at the time?

Herman: Yeah, all of the reports that were out, that were floating around at the time … every single report that was floating out at that time was inaccurate. I was not lying. I felt very comfortable saying that.

Patrick: What about the LSU opportunity? Did they reach out to you?

Herman: Not to skirt the question, but I don’t know that how we got here is relevant. What’s really relevant is that we’re here now, Dan, and I’m excited about moving forward; I’m excited about the kids in the locker room; I’m excited about getting on the road recruiting. There’s a lot of things that happen that were reported, that did or didn’t happen, but at the end of the day I don’t know how any of that is relevant. I’m great with the team at Houston. I never once lied to them. I never told them anything that was false. Those are the only people that I need to make my peace with and I’ve done that. I’ve gotten numerous phone calls and texts, all positive, from my former players at the University of Houston, and from boosters and administration there. I’ve moved on, and I think it’s smart for everybody else to, too.

Did you have to sell yourself to Texas or the other way around?

Herman: I think there was a little bit of both, to be honest with you. My biggest thing, I wanted to know their vision for Texas football and moving forward. I wanted to know, President Fenves is and Mike Perrin the athletic director, if their vision for Texas football aligned with mine. Through those talks I came away very convinced that that will be the case. We will be aligned together in what we need in terms of resources and support to bring Texas football back to its rightful place among the college football elite.

Patrick: How do you sell Texas after what’s happened the past three years?

Herman: You sell it as we’re the flagship university for the greatest football-playing state in our country. We’ve won multiple national championships, we’ve played for multiple national championships, we’ve won conference championships and we’ve got some young talent on the team that needs some direction. But to sell it to recruits, it’s easy. We’ve got some of the best facilities in the country, we’ve got some of the best fans, we’ve got a great education here at the University of Texas to sell them and a great city in Austin. The recruiting will not be hard at the University of Texas. We’ve got so much experience recruiting the state of Texas and such good relationships with the high school coaches here. Selling this place will not be difficult. We need to stay competitive with the elite teams in the country — the Alabamas, the Ohio States, the Clemsons of the world — in terms of our facilities and our resources and our support staff and recruiting staff and all that, but at the end of the day we’re still the University of Texas … and we’re going to win a bunch of championships while we’re here.

So really, what are D’Onta Foreman’s Heisman Trophy chances?