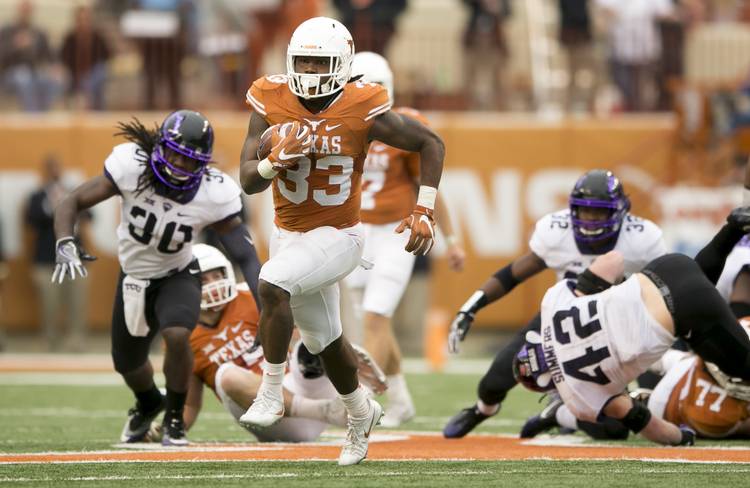 With his NFL decision coming this afternoon, Texas running back D’Onta Foreman should not over-think things. Go get the money, young man.

New coach Herman has already talked about hitting the recruiting trail and the two decades of experience in Texas towns will serve him well. However, his first recruiting pitch should be similar to the one Mack Brown made to Ricky Williams when he took the Texas job in 1998. Mack convinced Williams to not turn pro a year early and the result was a Heisman Trophy and the beginning of a sustained run of success under Brown.

Now Herman has to try to sell his program to the team’s best player.

Herman will have a tougher time convincing the national rushing leader  to return for his senior year, especially since Foreman told us after the TCU game that a lot of his decision would depend on if Charlie Strong would be back for a fourth year.

Aside from fumbling too much — something that’s easily corrected with ball placement —Foreman is NFL ready. A running back only has so many carries in his body before it all starts to go south physically. Just ask NFL legends like Earl Campbell, Eric Dickerson, and Marshall Faulk who experienced a decline in production around age 30. Campbell told me and Kirk Bohls on our On Second Thought podcast that he saw some of himself in Foreman.

When I watched Foreman tearfully leave the field after the TCU game, it felt like a goodbye and with Strong gone now, it’s the perfect time to transition to the next level.

Foreman will be 21 by the start of the 2017 season. This won’t play with my target audience but I would advise him to begin his professional career now. He likely won’t land in the first round in a deep NFL draft but why carry the ball another 323 times next season and not get paid for it?

Foreman ran for 2,049 yards and went over 100 yards for a school-record 13 consecutive games. There’s nothing left to prove. His star will never be as bright for NFL teams as it is right now.  NFLDraftScout.com has Foreman ranked seventh among running backs in a deep class that includes LSU’s Leonard Fournette, Stanford’s Christian McCaffrey, Florida State’s Dalvin Cook, and Oklahoma’s Samaje Perine.

After becoming the second Longhorn to rush for over 2,000 yards, it’s time to go get his money. Foreman has nothing left to prove on the collegiate level. A Heisman trophy is possible in 2017 but is it worth the risk when he’s already projected to go in the top three rounds?

NFL money isn’t forever money. Foreman should do the smart thing and apply for the draft.