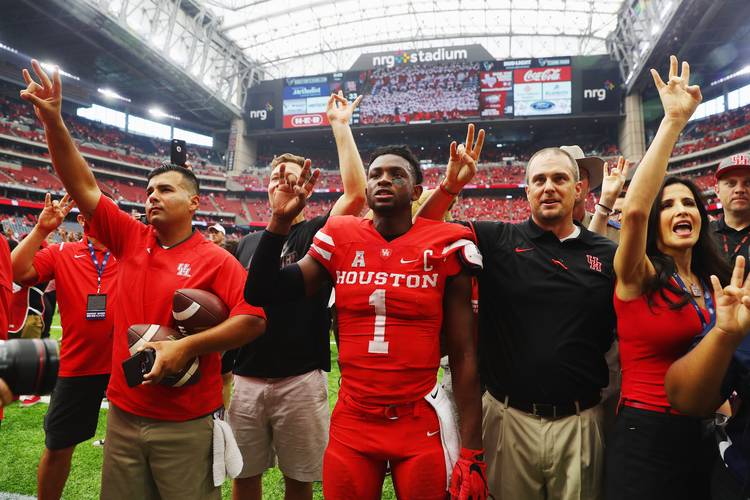 Quarterback Greg Ward Jr. #1 of the Houston Cougars celebrates with his coach Tom Herman after they defeated the Oklahoma Sooners 33-23 during the Advocare Texas Kickoff on September 3, 2016 in Houston, Texas. (Photo by Scott Halleran/Getty Images)

For the past two seasons — and in some circles longer than that — Tom Herman’s had been heralded as the next big thing. Now he’s here, and Longhorns fans sure hope the hype is justified.

When you glance down his resume — sorting through his career from his early days as a graduate assistant under Mack Brown, to his three years learning under Urban Meyer at Ohio State, all the way through his two seasons at Houston — there’s little reason to believe otherwise.

Why so low? Well, the results this past weekend by both Houston and Louisville took away some of the luster, and history will probably remember this as the third-biggest win for Herman in his two seasons with the Cougars. But it was still huge.

Circled by many in September as one of the biggest games of the year, those same people considered Houston an afterthought by the time the No. 5-ranked Cardinals rolled into TDECU Stadium. They were in for a rude awakening. The Coogs sacked presumptive Heisman Trophy winner Lamar Jackson 11 times and forced three turnovers.

Offensively, Herman put the pedal to the metal with a fake punt and a halfback pass that both led to second-quarter touchdowns, and quarterback Greg Ward Jr. thoroughly outplayed Jackson. Houston led 31-0 … at halftime.

Even before Herman was a household name, he may have helped revolutionize college football. Many believe the Cyclones’ upset of the Cowboys — and the ugly BCS Championship rematch that resulted — helped turn the tide toward the College Football Playoff.

The game will always be remembered for THAT field goal, but Herman probably remembers it for the comeback he helped engineer. Iowa State trailed 24-7 in the third quarter before rallying to tie it with 5 minutes left. Herman used a triple threat of Jared Barnett, Jeff Woody and Albert Gary to defeat a team that many believe could have won a national championship.

The Cougars backed up their 2016 Peach Bowl win — we’ll get to that — by physically dominating the Sooners, and Herman cemented his name as a giant killer.

Beyond five sacks of Baker Mayfield and a third-quarter kick-six that showed off preparation and execution, the atmosphere inside NRG Stadium signaled a culture change for the program. More than 71,000 fans packed the NFL arena, and most of them were there to support the Coogs.

In 22 months, Herman created more excitement than the program had seen in the previous 25 years or more.

Meyer rightfully got most of the credit for Ohio State winning the 2014 CFP National Championship with third-string quarterback Cardale Jones, but Herman played a huge part. Then the Buckeyes offensive coordinator and quarterbacks coach, Herman oversaw a Heisman-esque regular season by his own recruit, redshirt freshman J.T. Barrett. Then Barrett broke his ankle in the regular-season finale against Michigan.

Ohio State put more of the load on running back Ezekiel Elliott and played to Jones’ strengths — namely, throwing the ball downfield (Shane Buechele, anyone?). On a week of first-team reps, Jones shredded a good Wisconsin defense for 59 points, then played well in wins over Alabama and Oregon.

It’s no coincidence that with Herman gone in 2015, things became more difficult for Barrett and Jones despite having many of the same offensive weapons.

Not to mention the strides Herman made with Braxton Miller in the passing game, and Ward’s emergence at Houston. When it comes to recruiting and teaching quarterbacks, one could argue Texas now owns the best in the business.

This was Herman’s showcase for a number of reasons. The Coogs were playing with house money when they made a New Year’s Six bowl in his first season as a head coach, and he got them to play like it.

That set the scene for 2016 preseason hype, the win over Oklahoma in a packed NFL stadium and, ultimately, Herman landing the Texas job.

Early trick plays and good schemes on both sides of the ball have become penchants of Herman’s teams in big games, and one would expect him to bring those those traits with him to the 40 Acres.